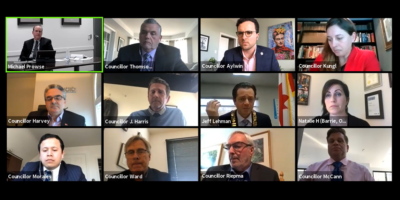 There will be a larger salary for the next mayor and 10 councillors at Barrie City Hall.

On Monday, council supported a recommendation from a five-person independent compensation review committee to bump the pay of the new council that will be elected Oct. 24.

“The increases to the rate of compensation, I think, are very modest,” said Mayor Jeff Lehman.

Coun. Robert Thomson expressed concern about the rise in the car allowance.

“I just think at this time we have to be very careful,” Thompson said. “There are lots of our residents who don’t have perks like this.”

Coun. Keenan Aylwin said he echoed the comments of Coun. Sergio Morales that this compensation is about the future leaders of Barrie and not about the current council.

“We’re all here because we felt we could make this job work with our current economic circumstances,” said Aylwin. “We need to put ourselves in the shoes of others who may not think they could make it work economically to work this job, but they may have passion.”

“The reason I say that is because we want to attract younger, diverse people to this council, and I think that if there’s a reasonable compensation package for them, then more people will be able to see their way clear to run for council.”

The compensation review committee recommendations add up to nearly $600,000 over a four-year period when benefits, health, pension, conference expenses, and family and employee assistance programs are taken into consideration.

The compensation review recommendations will go to city council for a final decision on March 7.