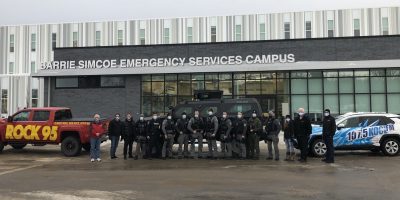 The Barrie Police Association has dug deep and have provided thousands of dollars to make sure kids get a better holiday this year.

On Thursday, members of the Barrie Police Association, including President John Brooks, presented a $7,000 cheque to the Rock 95/Kool FM Toy Drive. The annual effort is put on by Barrie 360’s parent company Central Ontario Broadcasting, and is marking its 30th year.

Brooks told Barrie 360 the association’s members voted on which charities to support this year, and Barrie 360’s in-house charity was among the few chosen. “Our members at the Barrie Police Association realize the difficult year it has been for a lot of members within our community and we would like to do our part in ensuring that as many children as possible are able to celebrate the holidays the way they should,” said Brooks.

⁦Today, ⁦@Rock95Barrie⁩ & ⁦@KoolFMBarrie⁩ dropped by #BPSHeadquarters to discuss this year’s toy drive. Our Tactical officers, wearing #PPE, will be ⁦@ToysRUs⁩ at 555 Bayfield St. this Saturday from 11-3pm & helping to fill Rescue 1 with new & unwrapped toys. pic.twitter.com/bwJoXIw35R

This comes as the Barrie Police Service gets geared up to stuff a cruiser full of toys this weekend; the service’s tactical unit will be out at the Toys R’ Us store on Bayfield St. in Barrie from