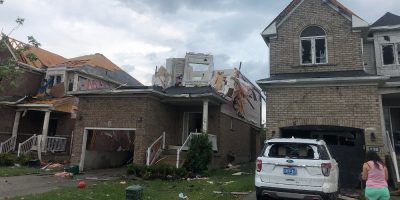 Environment Canada has confirmed, based on video provided, that a tornado did touch down in south Barrie Thursday afternoon.

An Environment Canada forecaster would not speculate on the wind speed and strength of the tornado. That will be up to an investigative team that is en route to the scene.

The national weather service issued a tornado warning for Barrie and area shortly after 2:30 p.m. Thursday. Not long after that, reports of damage started rolling into the Barrie 360 newsroom.

Charlie from Kool Mornings with Dale and Charlie was attending an event at Barrie’s Cedar Links golf club when she said something hit. She was able to take some pictures of the aftermath.

The tornado warning ended for Barrie moments following reports of a twister in the area, but continued further south in the early afternoon.