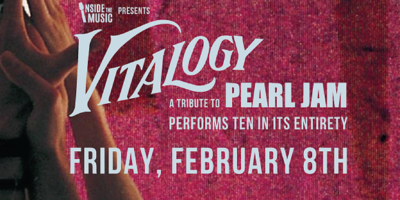 Barrie, and the surrounding areas are filled with fun events for the whole family.

From concerts, to craft sales, to festivals, there’s always something going on in Barrie. We are the source to help you find something fun to do no matter what you’re looking for.

Formed in 1999, childhood friends Don Murphy, Jamie Taylor, Sean Taylor, Ian Ross, & Dan Trickett put their mutual love for music & Pearl Jam into the band ‘Vitalogy’ (a tribute to Pearl Jam). Over the years the group has performed music spanning most of Pearl Jam’s catalogue. The catalyst & singer, Don Murphy, is as big a fan today, as he was then. After recruiting Jamie & Sean Taylor on drums & guitar, from Barrie bands Flud & Used for Glue, he added Ian Ross & Dan Trickett on guitar & bass from the band, The Ground Floor. Known for a tight energetic live show ‘Vitalogy’ captures Pearl Jam’s sound & essence!

Produced by INSIDE THE MUSIC bringing world-class musicians & artists to perform live in venues across Ontario!