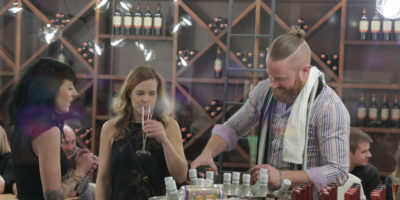 It was exclusive, intimate, indulgent and exploratory. It was the kind of night where a couple who had been vegetarian for 8 years let their inhibitions go for a taste of kobe beef prepared and served by Barrie’s very own celebrity Chef Randy Feltis.

The party was 6 Dishes, and you had to win to get in. It was a culmination of Barrielicious and those lucky enough to get a seat at the open table at Bistro 6 were treated to 6 extravagant dishes.

First up was caviar bumps with creme fraiche, followed by maple syrup marinated monkfish with celeriac and leek fricassee.

Things got heated when a thunder oak gouda was lit on fire before dish 3, which was penne pasta and gouda with braised sweetbreads.

Kobe beef imported from Japan was served with pomme gaufrette for Dish #4. Dish #5 caught some people by surprise – but Beaver Ballantine with pomme puree, mint pea and black truffle had the crowd drooling.