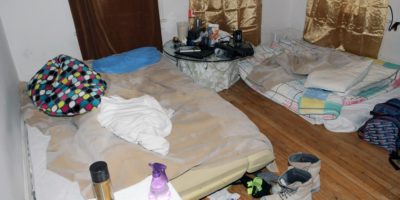 “Yesterday I went to bed a slave. Today I am a free man.”

Forty-three people, mostly men, have been freed from squalor, after a one-day blitz that saw 12 search warrants executed by three services. Over 250 front line officers from the Barrie Police Service, Ontario Provincial Police, and Canadian Border Security Agency were involved in the raids, following an investigation that started in 2018.

Investigators started receiving tips in mid-2018 about a Barrie-based cleaning company that was forcing migrants to clean area hotels and resorts. The victims paid large sums of money to be brought to the area with promises of higher education or work visas, but were instead forced to live in squalor while their wages were garnished, according to investigators.

Authorities claim a bus would arrive at a Barrie address every morning, and transport these victims to job sites in Barrie and Wasaga Beach, before being transported back. A series of fees put in place by the so-called employers means any wages paid to these victims were held, according to OPP Deputy Commissioner Rick Barnum, “…”for lodging, transportation to and from work, and many other fees along the way. The traffickers controlled their pay. After paying these fees, workers would be left with minimal compensation, less than $50 a month.” A series of photographs released by police shows the conditions in which these victims were forced.

Investigators suspect the cleaning company is run by two individuals who are currently being sought by authorities. The hotels and resorts that contracted this cleaning company were unaware of this, believing to have contracted a legitimate business instead. A statement from James Henry, VP of Hospitality for Blue Mountain Resort indicates there were no signs these people were in any distress.

” Our experiences with the contract employees working with this company were excellent. Each of them integrated well into our ‘Blue Mountain family’ of employees by attending social events and even participating in gift exchanges over the holiday season. They were known to be happy, engaged and eager to work. When asked about their adjustment to Canada by Blue Mountain supervisors, the associate’s answers were always quite positive. No indication of abuse or exploitation was given to our team. Had we suspected anything close to the nature of the allegations, we would have immediately alerted police.”

At a Monday morning media conference, Barnum recounted how one of the victims told investigators after the fact, “yesterday I went to bed a slave. Today I am a free man.”

Barnum went on to say this investigation was unique, in that it was victim-focused “Human trafficking is modern day slavery. Labour human trafficking is a difficult crime to investigate. At every stage, our collective concern has been to ensure these 43 victims are well cared for from a personal health and wellness perspective and that they are now safely housed.”

The forty-three victims have been offered lodging and employment at local resorts, including Blue Mountains.