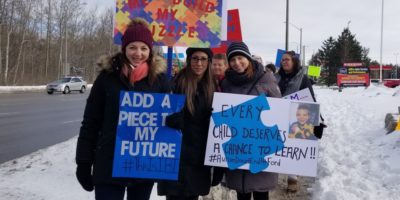 That quote from Dr. Stephen Shore, an Autistic Professor of Special Education at Adelphi University in Nassau County, New York.

The quote echoed by Amanda Baysarowich, the Owner/Director of IBI Behavioural Services following the provinces announcement to eliminate income testing and exploring autism support based on needs.

“There’s varying degrees of it, from the lowest end to the highest end. Really I think it’s important for the stakeholders to come back to the table and really re-evaluate these programs and implement needs based strategies based on where kids are at clinically” says Baysarowich.

Parents of children with autism have been protesting the plan announced by Children, Community and Social Services Minister Lisa MacLeod, saying it would leave kids without access to the levels of therapy they need.

Baysarowich notes the fight won’t end: “There’s still been no mention from Minister MacLeod that it’s not needs based therapy, so at the end of the day that’s what parents are going to continue to fight for. I firmly believe the rallying and the protesting won’t stop because parents want intervention for their children and this is the only evidence scientifically backed medical treatment that assists their child with autism”.

MacLeod has previously announced that in order to clear a waiting list of 23,000 children, kids with autism would receive direct funding to pay for treatment, with caps of up to $20,000 per year for treatment for children under six and $5,000 a year for children six to 18 based on family income.

The government is now looking at how best to provide additional supports to families based on the diagnosed need of the child.