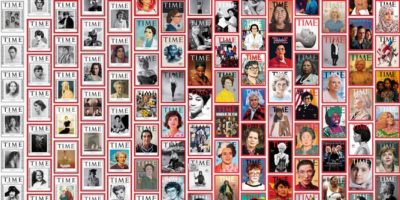 Time magazine has chosen 100 “Women of the Year,” selecting one trailblazing woman to represent each year from 1920 to 2019. It’s a distinctive way to celebrate Women’s History Month, but it’s also an acknowledgement that for many years, women’s contributions were systematically overlooked.

For 72 years, Time’s most anticipated cover was called “Man of the Year” — until 1999, when the magazine changed the title to “Person of the Year.”

Still, the male trend continued, and most of the people chosen for “Person of the Year” have been, in fact, men. So, as a reparation of sorts, Time is honoring 100 women now — from suffragists to Beyoncé, and many in between.

In the 1950s, Time broke with its mostly male trend to select Queen Elizabeth II for the cover in 1952, the year she became queen at the age of 26. She was one of the few women to ever be chosen for the coveted title.

Time kicks off the 1960s with the Mirabal Sisters — Patria, Minerva and María Teresa Mirabal — who helped organize an underground movement to challenge the regime of dictator Rafael Trujillo in the Dominican Republic. The sisters were repeatedly arrested for their political activities.

Actress Rita Moreno was chosen for 1961, the year she got her breakout role in “West Side Story.” Jackie Kennedy (1962) and Aretha Franklin (1968) were also chosen for this decade.

Marsha P. Johnson, a self-described transvestite and drag queen was chosen for 1969 to honour her role in resisting the police raid at the Stonewall Inn in New York City that kicked off the modern gay rights movement.

Feminist Gloria Steinem (1970), reproductive rights symbol “Jane Roe” (1973), and disability activist Judith Heumann (1977) are choices indicative of the time. These women all evoke the sentiment of the 1970s, a decade of activism and change.

The 1980s brings recognition to British Prime Minister Margaret Thatcher (1982), writer bell hooks (1984); the fastest woman in history, Florence “Flo Jo” Griffin Joyner (1988) and Madonna (1989). Princess Diana was chosen for 1987 — the year she was invited to open the first hospital ward in the U.K. dedicated to the treatment of HIV/AIDS, according to Time.

Anita Hill was chosen for 1991, the year she accused Supreme Court nominee Clarence Thomas of sexual harassment and testified before Congress.

The 2000s kicked off with another Supreme Court Justice, Sandra Day O’Connor, whose vote broke a 5-4 split to rule that George W. Bush won the presidency over Al Gore.

In 2002, Time did actually choose three women to share the “Person of the Year” cover, selecting “The Whistleblowers,” Cynthia Cooper, Sherron Watkins, and Coleen Rowley. These women were praised for doing the right thing, alerting the world to frauds, hoaxes and conspiracies within their industries.

Angela Merkel was actually chosen as Time’s 2015 “Person of the Year,” joining the shortlist of women who have been awarded the title.

Last year, another young woman joined that list: Greta Thunberg was chosen as the 2019 “Person of the Year.”

In the history of Time’s original “Man of the Year” and “Person of the Year” covers, only nine featured women. Two of the women — Soong Mei-ling (Madame Chiang Kai-shek) and Melinda Gates — appeared with their husbands, and two covers featured multiple women — in 1975, Time chose “American Women,” and in 2002 they chose the aforementioned “Whistleblowers.”

Now, Time is giving the title to 100 women — some of whom waited a century for the honour. Finally, in this Women’s History Month, these women are being recognized for their contributions to the world — and to other women who are following in their footsteps.