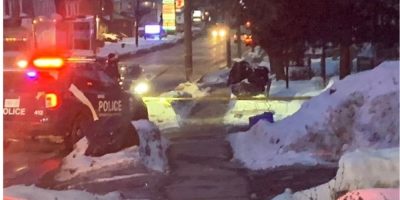 The search continues for a pair of suspects in the wake of a double shooting late Tuesday afternoon in Barrie.

The male victims are listed in serious but stable condition at a Toronto trauma centre.

A resident who lives at the home on Bayfield Street told Barrie 360 there are three units, a basement, middle and upper level. He said it was around 5 p.m. when he heard “a whole bunch of yelling” coming from the upper level for about 20 seconds and then a bunch of pops.

“I was like I hope that wasn’t gunshots, but when I looked out the kitchen window there was a guy crawling on the ground spewing blood on the snow.”

The resident said he called 911 as the man was asking for help. He said the man did not live at the residence.

“There is lots of people that frequent the house,” he added. “There are lots of random people that come and go.”

Leon told Barrie 360 that one of the victims was being driven to the Barrie hospital by someone when they were dropped off at Grove and Duckworth Streets, where a passing paramedic crew tended to the injured person. He confirmed the other shooting victim was located at the residence.

Police have said the shooting appeared to be an isolated incident and there is not believed to be any public safety.