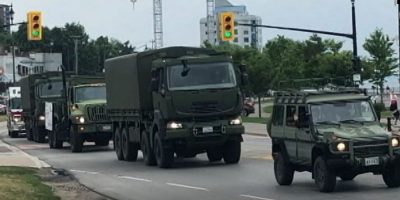 Military vehicles from Canadian Forces Base Borden paraded through Barrie, Alliston and Angus Saturday to promote awareness of CFB Borden’s Canadian Armed Forces Day and Air Show which is scheduled for June 11 and 12, 2022.

Next year’s event will feature several military and civilian demonstration teams with performers to be announced in the coming months. In addition to the air performers, there will be numerous ground displays showcasing equipment and members of the Canadian Armed Forces.