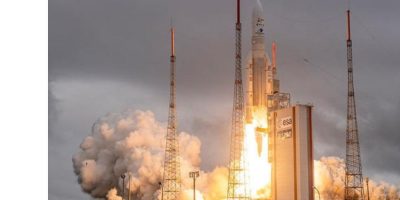 In a mission more than two decades in the making, NASA launched the most expensive science probe ever built Saturday, a $10 billion telescope that will attempt to capture starlight from the first galaxies to be born in the fiery crucible of the Big Bang.

Billions over budget and years behind schedule, the James Webb Space Telescope finally got off the ground Christmas Day, rocketing up from the European Space Agency’s launch site in Kourou, French Guiana, at 7:20 a.m. EST atop an Ariane 5 rocket.

The workhorse European booster, built by Arianespace as part of ESA’s contribution to the Webb project, put on a spectacular holiday show, racing away from its jungle launch site on the northeast coast of South America through a cloudy sky.

Accelerating through the sound barrier 47 seconds after liftoff, the Ariane 5 quickly climbed out of the thick lower atmosphere, shedding its two strap-on solid-fuel boosters along the way.

The first stage’s single hydrogen-fueled Vulcain 2 engine shut down 8-and-a-half minutes after launch and the flight continued for another 16 minutes on the power of the rocket’s cryogenic second stage.

Then, 27 minutes after launch, at an altitude of about 865 miles above the eastern coast of Africa, the James Webb Space Telescope was released to fly on its own, outward bound at more than 21,000 mph.

“Go, Webb!” a mission controller exclaimed as the team burst into applause.

Still folded up to fit inside the Ariane 5’s nose cone, the observatory’s single solar panel, critical to begin recharging the spacecraft’s batteries, deployed on computer command moments after separation, clearly visible in video downlinked from a camera on the rocket’s upper stage.

A few minutes later, NASA reported Webb was powered up, communicating with flight controllers, and was correctly oriented with respect to the sun with all six of its stabilizing gyro-like reaction wheels working normally.

“This is a great day, not only for America, for our European and Canadian partners, but it’s a great day for planet Earth,” said NASA Administrator Bill Nelson, speaking from the Kennedy Space Center.

He congratulated the thousands of men and women who built and launched the telescope, saying “you all have just been incredible and over three decades, you produced this telescope that’s now going to take us back in time.”

“It’s a time machine, it’s going to take us back to the very beginnings of the universe,” he said. “We are going to discover incredible things we never imagined.”

While that might sound like hype, Nobel laureate Adam Riess, who used the Hubble Space Telescope to help confirm the existence of mysterious dark energy, said Webb will live up to those lofty expectations if it works.

“If the mission succeeds, then I don’t think we’re over-hyping it,” he said. “I mean, all I can do is compare it to Hubble. Even if it’s only half as transformative as Hubble, (you) wouldn’t be over-hyping it.”

It will take Webb a full month to reach its orbital parking place in deep space a million miles from Earth — known as Lagrange Point 2, or L2 — where it can circle the sun in gravitational lockstep with Earth, minimizing fuel usage to extend its life as long as possible.

“This was such a great moment on Christmas Day,” Josef Aschbacher, director general of the European Space Agency, said of the launch. “The whole world has been watching this, and I’m very happy to say that team Europe has delivered. We have delivered the spacecraft very precisely into orbit in terms of altitude, speed, (orbital) inclination.”

The telescope is optimized to capture images of the first stars and galaxies to begin shining in the aftermath of the Big Bang, light that has been stretched into the infrared portion of the spectrum by the expansion of space itself over the past 13.8 billion years.

That light can’t be seen by the iconic Hubble, which Webb will eventually replace. Hubble was designed to study visible light wavelengths but even so, it has detected galaxies dating back to within a half billion years of the Big Bang.

Webb should be able to push several hundred million years beyond that, detecting light that began heading out when the universe was just 200 million years or so old. That’s the era when the cosmos first emerged from the hydrogen fog of birth and starlight began traveling freely through space.

The long hoped-for baby pictures of the universe are expected to shed revolutionary light on the formation and evolution of galaxies, the supermassive black holes that lurk at their hearts and the life cycles of stars, from birth to the titanic supernova blasts that cooked up most of the elements in the periodic table.

Closer to home, Webb also will study the atmospheres of planets orbiting nearby stars to characterize their habitability and provide routine, up-close looks at planets, moons, asteroids, and comets in Earth’s solar system from Mars outward to the remote Kuiper Belt beyond Neptune.

Lagrange Point 2 is far beyond the reach of any foreseeable astronaut repair crew, but it’s an ideal place to achieve the ultra-low temperatures required to detect infrared emissions from the infant universe.

But the orbit alone isn’t enough to cool Webb down to within the required 50 degrees or so above absolute zero.

For the telescope’s 21.3-foot-wide primary mirror and its four sensitive instruments to detect that faint heat, Webb must first unfold and stretch out a sunshade the size of a tennis court to block out the light and thermal emissions of the sun, Earth and moon.

It is considered by many the riskiest part of the mission, including launch.

More than 100 electrically-activated mechanisms, used to hold the sunshade’s five hair-thin Kapton layers in place during the vibration of launch and the onset of weightlessness, must all unlatch flawlessly so the membranes can be pulled out on booms as planned.

Each layer then must be pulled taut and separated by motor-driven cables running through dozens of pulleys.

If it all sounds complicated, it is. If it sounds unusually risky, it is.

“The sun shield is where so much of the deployment risk exists because that’s where so many of the single point failures exist, and it’s just complicated,” said Paul Geithner, deputy project manager.

“We have 107 little non-explosive actuator devices, membrane release devices … That’s just where so much of the deployment risk is because it’s a lot of parts. They’re simple mechanisms, but there are a lot of them and they all have to work.”

Sunshade deployment is expected to begin on December 28 and if all goes well, the process will be complete by January 2.

Then comes deployment of Webb’s 21.3-foot-wide segmented primary mirror, the largest ever built for an instrument in space. Like the sunshade, the mirror had to be folded up to fit inside the Ariane 5’s nose cone.

Starting about 10 days after launch, six of the mirror’s 18 hexagonal segments, three on each side, will be folded out and locked in place. Each segment can be tipped and tilted as required to achieve a razor-sharp focus, a process that will take months to complete.

Throughout the deployments and commissioning process, Webb will continue its slow cool-down to reach the required operating temperature. If all goes well, the first science images are expected about six months after launch.

“All of these single-point failures, all of these deployment mechanisms have to go right to make a telescope, there’s no halfway stage,” Mark McCaughrean, a senior advisor for science and exploration with the European Space Agency, said in an interview with Spaceflight Now.

“If the sunshield only half deploys, the telescope never gets cold, the instruments won’t turn on. So that’s the nerve-wracking time, that first month. And after that, the five months of cool down and commissioning, and then we can start doing the science.”

Banner image: A European Ariane 5 rocket thunders away from French Guiana carrying NASA’s $10 billion James Webb Space Telescope on a historic flight to look back in time toward the Big Bang birth of the cosmos. ARIANESPACE