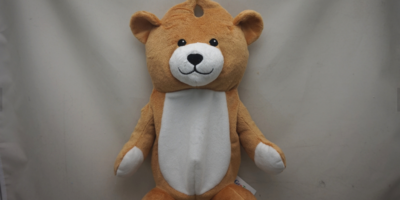 A 12-year-old girl from Connecticut is using her own experience with IVs to help other kids undergo treatments with a friendlier face. Ella Casano, who has an autoimmune disease, covers IVs with a teddy bear and she now wants to donate her “stuffed animal pouch” called Medi Teddy to young patients.

Casano was diagnosed with Idiopathic Thrombocytopenia Purpura (ITP) when she was seven years old, her business website said. According to the Mayo Clinic, ITP happens when the immune system mistakenly attacks and destroys platelets, which are cell fragments that help blood clot. Since Casano is at a high risk for bleeding or injury, she needs to receive treatment every eight weeks while using an IV. She took her early, dreaded encounters with IVs as inspiration for Medi Teddy.

“When I had my first infusion, I was surprised and a little bit intimidated by the look of the amount of tubing and medical equipment on my IV pole,” she said on her website. “As I saw more and more children experiencing the same feelings, I became more interested in creating a friendlier experience for young IV patients, so I created Medi Teddy.”

The back of pouch allows a doctor or nurse to see through and check on the medication a child is receiving. But on the front, the child only sees a teddy bear — and not a medical bag with medicine, blood or fluid being infused.

Casano launched a GoFundMe Sunday in hopes of collecting $5,000 to kickoff Medi Teddy and give away 500 of the animal pouches to children in hospitals. On the online fundraiser site, it said Casano has a patent for her pouches and had filed an application to turn Medi Teddy into a nonprofit.

In less than a few days, donations have poured in and doubled the amount — raising just over $11,000 as of Friday.