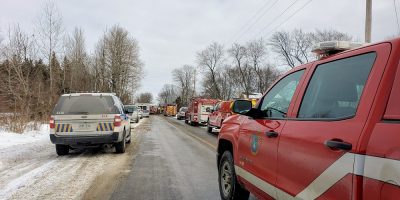 South Simcoe Police and the Fire Marshal are probing a fatal fire in Innisfil.

First responders, including police, Innisfil Fire and Rescue, and County of Simcoe Paramedics, responded to reports of a house fire on 2nd Line near Dempsey Street around 9 a.m. Wednesday. Emergency personnel arrived to find the home fully engulfed.

Once the fire was knocked down, a body was located inside. Investigators have yet to provide further details of the deceased, pending a post-mortem and positive identification of the body.

The cause of the fire remains under investigation.