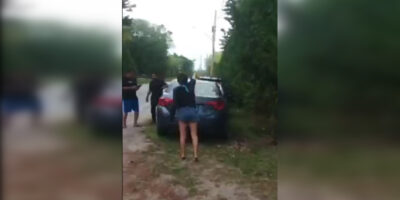 The Ontario Provincial Police has begun an investigation after a video containing racial slurs was posted online.

Sgt. Jason Folz with the Ontario Provincial Police confirms the video was shot in Wasaga Beach on August 22. “We have seen the video, and we have officers assigned to the investigation,” he told Barrie 360 over the phone.

The video appears to show a woman upset that a vehicle was parked on her front lawn. While she claims the driver spat at her, it was not captured on video.

What was captured was a woman uttering racial slurs towards the driver. The video goes on to show the woman pouring drinks and condiments on the man’s car as retribution for parking on her lawn.

The video shows a tow truck arriving, at the woman’s request, prompting the vehicle’s driver to leave the scene.

“I was disgusted by the behaviour and language in the video,” reads a statement from Wasaga Beach Mayor Nina Bifolchi. “This is not reflective of Wasaga Beach. This type of hateful and racist language has no place here or anywhere else.”

“To the individuals subjected to this incident I offer a sincere apology on behalf of our community,” she concluded.