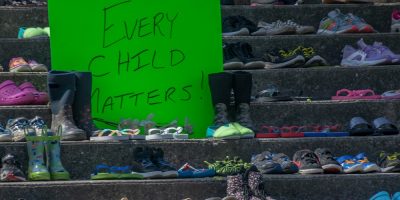 The Barrie Police Service is investigating reports someone stole shoes from a memorial to lost residential school children at the city’s waterfront.

Officers were called to the Spirit Catcher just after 4:30 p.m. Thursday by witnesses who claimed someone was stealing shoes from the memorial. The theft was caught on camera, according to police, along with the licence plate of the suspect.

POWERFUL MEMORIAL AT THE SPIRIT CATCHER IN BARRIE FOR THE 215 CHILDREN OF FORMER B.C. RESIDENTIAL SCHOOL

Barrie Police spokesperson Peter Leon couldn’t say whether this theft was motivated by hate or by need. “I certainly wouldn’t want to speculate. Even then, if it was a case of a person that was desperate and in need, there are other ways to go about acquiring shoes,” he told Barrie 360 on Friday. “Certainly not taking them from a memorial that is intended to recognize and pay respect to the loss of life that we learned about a short time ago.”

While many memorials of this nature have appeared across the country, Leon isn’t aware of any other such thefts. “We certainly hope that this is not a trend in any which way because it’s very, very disturbing if that was the case.”

Memorials in the form of children’s shoes have been cropping up across Canada, following the discovery of the remains of 215 children at the site of a former residential school in Kamloops, British Columbia.