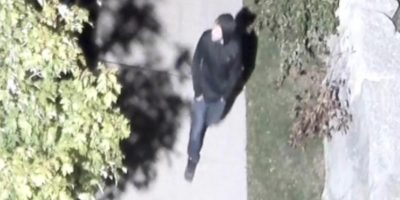 More charges have been laid by South Simcoe Police as part of an ongoing investigation of sex offences in and around the area of Big Bay Point Road and 25 Side Road in Innisfil.

This started with a call to police on Saturday, Sept. 11 around 10 p.m. about a man committing an indecent act in public. This was witnessed by a 14-year-old girl and her mother out front of their home.

A 26-year-old Innisfil man was arrested on Sept. 24 and charged with exposure to a person under 16 years of age and breach of probation. A search warrant was executed at his residence.

Police have also released security camera images to obtain additional information about the activities of this suspect over the past few months.

Investigators are appealing to anyone who has had suspicious interaction or has seen an unknown male matching the accused’s description to contact Detective Sergeant Kai Johnson at 905-775-3311 extension #1040, kai.johnson@southsimcoepolice.ca or Crime Stoppers.

He is described as white with brown hair, 5’8″ and 138 pounds, with a thin build and a noticeable scar on his left thumb, a tattoo of a bicycle (2 circles connected by a line) on the inside of his right wrist, and a small mole on the left side of his face near his mouth.

The suspect remains in custody and has a court appearance on Tuesday, Oct. 26.