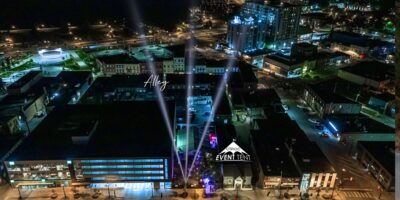 There is frustration in Dustin Leigh’s voice when he talks about the Ford government’s decision ordering bars and restaurants to stop serving alcohol after 11 p.m. and requiring establishments to close at midnight in a bid to slow the spread of COVID-19.

The co-owner of Alley nightclub in Barrie adapted to the new climate when it was clear their main business was not to going to open anytime soon. Leigh and Ty Jones opened a tent space outdoors known as the Event Tent, with picnic table restaurant seating that was socially distant, live entertainment, and food provided through a partnership with Donaleighs.

Now the Event Tent has folded, at least temporarily. Closed, according to a post on Alley’s Facebook page, because “the newly released government restrictions of an 11 p.m. last call makes operating a business like ours, even with our dinner adaptations, non-viable as we are reliant on late night service.”

“I don’t get it,” said Leigh. “If you are using Barrie as an example, there definitely watching us and keeping us accountable here. So where isn’t the accountability?”

He would have preferred if the province had come down hard on restaurants and nightclubs that were not following protocols and possibly contributing to the spread of COVID-19, or as Leigh puts it “put more feet on the ground and go after whoever is doing wrong.”

Leigh feels the government has pulled the rug from under the feet of businesses that have been complying with COVID guidelines.

Not once does Leigh complain about the additional scrutiny from health authorities, the police and others. He just feels there is no accountability in the system and the premier has decided to paint all restaurant and bar owners with the same brush.

The decision to temporarily close affects about 70 employees, everyone from staff to contractors.

“All of them rely on this (Event Tent) to support themselves. We are just trying to get creative to keep people working and keep our head above water.”

Alley targeted the 19 to 30 year old age group. With the Event Tent, the adaptation included spreading that reach to a larger group.

Leigh’s plan was to keep the Event Tent operating until mid-November. There were heaters at every table in anticipation of the colder weather to come.

In the Facebook post, the ownership team admits the province’s new restrictions “hit us completely by surprise.”

“What frustrates me is the contradictions and approach by the government. If this was the beginning of COVID, where there was no warning, I get it.”

Leigh expected the government to work with him and not against him.

“As a young business owner who is constantly balancing risk while trying to keep 70 staff members with work, we made major adaptations to our business and safety measures around our understanding of how the government was going to manage the balance safety and the economy during the inevitable second wave.”

Leigh said it was his expectation the province was going to target private gatherings where there is no accountability in place.

“We leaned on that information when we made our business decisions. But then the government acts surprised about a second wave and hits an 11 p.m. last call.”

He said to make the Event Tent work they needed every hour of service.