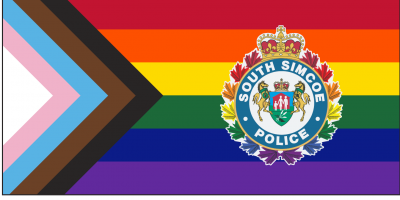 A new month and a new perspective from South Simcoe Police Service (SSPS).

The organization is kicking off Pride Month by unveiling the service’s first-ever Pride flag. The flag was created by the SSPS Diversity, Equity and Inclusion Committee (DEIC) which has been working to promote positive, meaningful change within the organization. Also, for the first time, the service has Pride epaulettes in support of the LGBTQI2S community.

Another first will take place on Wednesday, June 16 with the raising of the Pride flag at both police stations, at 9:30 a.m. at the North Division in Innisfil and 3:00 p.m. at the South Division in Bradford.

Police will stream both events through Facebook Live for those who cannot attend in person as numbers are limited due to the pandemic.

The DEIC was formed last year and is comprised of civilian and uniform members from throughout the SSPS. The committee’s focus is to educate and support the organization and community.

“The work of this committee will be integral in bringing about meaningful change by not only recognizing the tremendous diversity of our service and community, but taking steps to ensure we embrace inclusion at all levels. We look forward to celebrating these historic events with our members and the community,” said South Simcoe Police Chief Andrew Fletcher.