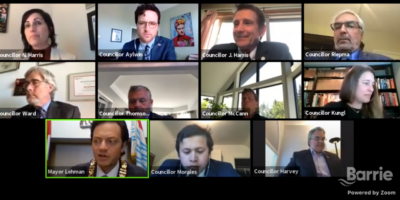 Barrie city councillors will get an early financial stocking stuffer this week. The city’s finance department will have binders available for each councillor so they can pour through the 2021 budget numbers.

A budget overview was presented to council general committee on Monday. The overview launches discussions which will culminate in the rubberstamping of the 2021 operating budget in late January.

Treasurer Craig Millar served up a $370 million operating budget with a 3.59 percent property tax increase, which works out to $160 more for the average homeowner on a property assessed in 2015 at nearly $368,000.

The operating budget includes $5.4 million if city operations are maintained at current service levels. There is $3.2 million for service partners such as police, the health unit, conservation authorities, and the County of Simcoe, which is responsible for social services and paramedic services. There is also $2.5 million for the dedicated infrastructure renewal fund (DIRF), which adds one per cent to the tax rate.

Staff has been instructed by council to cap any potential 2021 tax increase at 1.95 per cent, excluding the DIRF, and to identify service level changes to achieve this target. Service partners have been asked to hold their budget ask to 1.95 per cent.

Despite the financial punishment COVID-19 has doled out, in particular to culture, recreation and transit revenues, the city has managed to steer the ship by reducing costs in other areas, including labour.

Mayor Jeff Lehman asked Millar to confirm that the amount in the budget for salaries and benefits of city staff is forecast to be lower in 2021 than in 2020.

Millar said they have their fire union contract and have made assumptions for CUPE, which if there are increases, have largely been offset by reductions in part time to cover the lost revenue expected because of COVID.

Councillor Mike McCann said some councillors were floating the idea of a zero per cent tax increase and he wanted to know if that was feasible based on current numbers.

Millar issued a word of caution about aiming for a goose egg.

“You are deferring the cost to another year. Slow and steady is always the approach you prefer in municipal finances. The stronger you are the better you are to help the community out.

Millar urged councillors to do their homework and look at the service levels.

“I think there is probably some oppportunities for some kind of solution to help to get to a lower level (tax rate) for 2021. But just remember that might set you back in 2022 and 2023, and some of our big capital plan needs we want to do.”

The city did receive $2.6 million from the Ontario government to help cover transit shortfalls between Apr. and Sept. 2020. Barrie has applied for Phase 2 of the provincial safe restart funding to cover the period from Oct. 2020 to Mar. 2021.

The province also provided Barrie with $6.6 million in municipal relief funds. The city has not heard back if it has qualified for part two of the program.

A staff report to city council in September projected Barrie would end the fiscal year with a $2 million deficit.