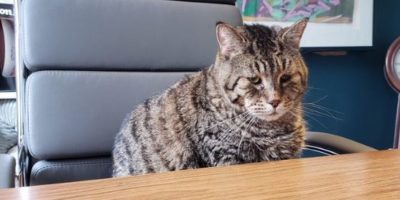 A giant cat has taken the internet by storm and he’s up for adoption. The 26-pound cat has struggled to find his forever home, but now people all over the country have fallen in love.

“OMG, big boi Mr. B is a CHONK. He’s a chonk of a chonk. He redefines the term,” the shelter wrote. They added that he is “genuinely big boned” and can’t help his size.

OMG, big boi Mr. B is a CHONK. He’s a chonk of a chonk. He redefines the term. Can you guess how much he weighs? More importantly, can you give him a home? Adopt this jumbo-sized package of fluff & love: https://t.co/v8aB6PzBbL. Please RT to help this sad-eyed guy find happiness! pic.twitter.com/tquRuvRaws

Mr. B’s massive size and concerned facial expression have inspired countless memes — and led to the shelter’s site crashing after too many people tried to adopt him. Even the Philadelphia Fire Department wanted in on the action, offering Mr. B a spot on the force.

“Um, if he doesn’t get adopted (highly unlikely) he’s welcome to join our K9 Unit as its first Feline (he IS a cat, right?!) member,” the department tweeted.

The shelter called the response to Mr. B “overwhelming” but said he is not quite ready to be adopted yet. “He still needs a more thorough check up by our vet,” the shelter said. 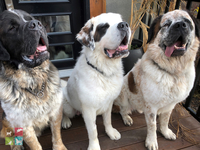