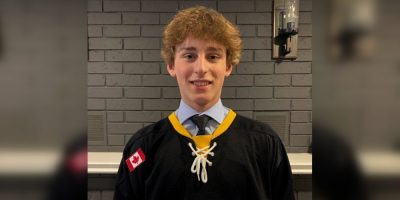 The Barrie Colts had to wait a while in this year’s OHL Priority Selection before their 19th overall selection was up.

“We ran to the computer and punched in his name as fast as we could. There was no hesitation,” Williamson said when it came time to make the decision early Friday night. “We had said a lot earlier, we had Plan B, C, and D, but if Beau was there we were taking him.

“We thought awfully high of him. He’s a smooth, puck-moving defenceman. He’ll have a real bright future with us for the next four or five years.”

It would be an emotional moment for the organization when former Colt Ben Hawerchuk announced Akey as the first pick in an honour of his late father Dale Hawerchuk.

“Dale was a huge part of this team and our community,” said Howie Campbell, President of the Barrie Colts. “Having his son Ben make our first draft announcement since his father’s passing was very special.”

With the addition of Akey, the Colts believe they added another impact all-around defender to a group headed by top NHL prospect Brandt Clarke.

“It was one of the first things Beau said, he was really looking forward to learning from Clarke,” Williamson said. “We got a real star defenceman and he can help make the next guy the next star.”

At six-foot, 170-pounds, Akey had 11 goals and 22 points in 33 games with the Waterloo in 2019-20. Williamson says the Colts have added a player who makes everyone around him that much better.

“He’ll generate offence and can quarterback a power play,” Williamson said of Akey. “He really is a well-rounded defenceman with elite skating ability and a good-sized kid. He’ll be able to step right into our league and play.”

The first round was dominated by Oakville Rangers U16 AAA forwards with five selected in the first 11 picks.

“We thought there’d be certain guys we’d be considering at the 19 pick and they were gone early, so that’s what pushed Beau down a little bit,” Williamson said. “We believe Beau was Top-10 talent. We thought he was in that range, but the Oakville forwards had a real run and that pushed everyone down a little bit, and teams thinking we’ve got to take the next forward and we were real happy to get the defenceman.”

Barrie made Toronto Marlboros U16 AAA centre Christopher Grisolia their second-round pick, 24 overall. Williamson admits they were actually looking at taking Grisolia with the 19 overall pick and defensive defenceman Grayson Tiller in the second round.

Grisolia, says Williamson, was the best fit for the Colts. A real hard-working forward with great skill, but a great engine. A well-rounded player with solid size and is difficult to play against.

Williamson said he could start Grisolia on the left-wing, though he could also fit in down the middle on the fourth line. A versatile, blue-collar player, the team was also impressed with its interview with the player and family.

“He really just checked the boxes for us,” Williamson said. “His nickname is Mr. Playoff. That tells you something about the kid that he shows up in big games and plays his hardest, so we liked everything about him.”

The Colts ended up getting Tiller in the third round (44) and that had Williamson and assistant general manager Rob Stewart beaming.

The five-foot-10, 183-pound Hamilton Jr. Bulldogs U16 AAA defensive defender is described as someone who is hard to play against and someone you can match against the opposing team’s top forwards.

“One of the analogies a scout gave to me when I was talking to him was, ‘He’s like a smaller Chris Pronger,'” Williamson said. “When we did interviews with a lot of players we asked them who’s the guy you don’t like or is not the best matchup in the world and Grayson Tiller’s name came up consistently.

“We’ve got a couple of guys there (Akey, Tiller) that can play four years or more.”

The Colts completed Day 1 of the two-day draft on Friday by using their second third-round pick (55) to grab drafting Clarington Toros U16 AAA centre Ben Pickell.

Williamson admits he’s someone they really wanted to bring into the fold. The aggressive forward plays the game extremely hard with high energy and is related to Barrie winger Ethan Cardwell.

“You can’t understand how happy we were at the end of Day 1 with the four guys we got,” Williamson said. “We were all looking at each other, going we 100 per cent wanted the three of them, and then Pickell was like a dream falling into our laps.

“To get all four of them was a pretty good day for the Barrie Colts for the first day.”

Barrie had its mind made up on who to take with its fourth-round pick (63) to kick start Day 2 of the draft on Saturday and Barrie Jr. Colts U16 AAA winger Nicholas Lamont was there when it came time to make the pick.

An agent had told Williamson that Lamont was being considered by teams in front of them.

“You kind of hold your breath,” the Colts acting GM said. “Our Barrie scout was pounding the table this is the guy.”

The five-foot-10, 146-pound Briere, of the Nashville Jr. Predators 16U is the son of Toronto Maple Leafs goaltending coach Steve Briere.

“He’s an NCAA guy possibly, but he’s going to give us a real good look at,” Williamson said. “He was very appreciative and really just wants to sit down and talk with us. That can be just a home run for us.

“This isn’t just a stab in the dark. It’s a much better percentage that we can get him.”

Markevych, who played for the Mississauga Reps U16 AAA team had some injury issues that may have scared away teams.

“There is no way he should have been picked where he was picked.”

“I might be repeating myself, but I can’t tell you enough what a great couple of days I think we had,” Williamson said.

“A lot of credit to Rob and the guys. Drafts are always different and there’s a lot of varying opinions, but we were really on the same page.”

ICECHIPS: Barrie Jr. Colts 16U prospect Noah Cochrane ended up being one of the biggest surprises of the draft when the blueliner, who was expected to go in the early rounds, dropped to the Sudbury Wolves in the ninth round. Jr. Colts teammate Cameron Mercer was drafted by the Kitchener Rangers in the third round… The top local player to hear his name called was Orillia native Colby Barlow, who was selected eighth overall by the Owen Sound Attack… The Colts don’t expect to hold their annual rookie skate due to the COVID-19 pandemic. Teams should be able to hold larger camps when training camp gets the go-ahead, likely in early September, with the idea of bringing in a larger group for the first couple of days… With five overagers on the roster and only three spots for the veterans in the lineup, Williamson is hoping to trim that number before camp. He says he has talked to teams and the possibility remains that he could move one of Matthew Hill, Nathan Allensen, Anthony Tabak, Nicholas Porco, or goalie Jet Greaves this summer. Williamson wants to do all he can to get that number to three by the start of next season.