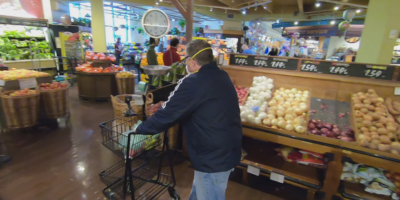 Long before social distancing, Greg Dailey was already keeping his customers an arm’s throw away. In fact, to those on his paper route in central New Jersey, Greg has never been anything more than a blur past their driveway. But all that changed when one elderly customer asked him a simple favor: Could he please pull in and throw the paper closer to the garage?

“If she can’t get the paper at the sidewalk, which is 20 feet from the house, in this pandemic, how is she going to get the things she needs?” Greg said. “So a couple days later I just decided, you know what, I’m going to put this note out.”

The note, stuck in the next day’s edition, said “My name is Greg Dailey and I deliver your newspaper every morning”  —  which was news to most people — “I would like to offer my services — free of charge — to anyone who needs groceries.”

From that moment to this, the phone has been ringing off the hook.

He takes the orders, does the shopping, and delivers the groceries — not by whipping them out the window, but by carefully placing them on the porch.

So far, he’s delivered to nearly a hundred senior citizens on his route. and some not on his route. If Greg hears about a person who is elderly or compromised, he will be there. And, boy, are people grateful.

Eileen Stein is 85 and recently widowed.

“I don’t have enough adjectives. He is one of the finest people in the world,” Eileen said.

The lady at this house went even further. She called him the closest thing to God.

“There’s a level of appreciation here, Steve, that goes above and beyond anything I’ve ever seen. So, no, I’m not going to stop,” Greg said.

Greg says he might not necessarily stop when the pandemic is over.

“There’s something about being able to do something really nice for people,” Greg said.

When you hear folks say America will emerge from this stronger, this is exactly what they mean. Greg didn’t do volunteer work before — heck, he didn’t do his own grocery shopping before. He’s just a guy called into duty by circumstance — who will now stay in service by choice.