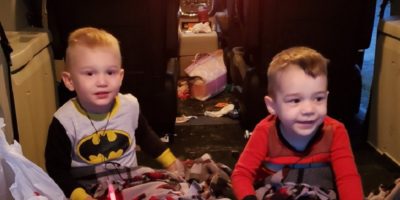 The two young children and an elderly man at the centre of an Amber Alert have been found safe and sound in Toronto.

As a direct result of the Amber Alert Mr. Easton and his two grandchildren were located by the Toronto Police Service driving on Lakeshore Blvd in Toronto. They are all in good health. We thank everyone for their assistance.

The alert was issued around 3:00 Thursday morning following the disappearance of 2-year-old Harrison and 4-year-old Keegan, along with their grandfather, 70-year-old Leo Easton. The trio were last seen at the Upper Canada Mall in Newmarket around 3:00 Wednesday afternoon.

The three were found, safe and in good health, driving along Lakeshore Drive in Toronto. Investigators maintained throughout the Amber Alert they did not believe the children were taken through ill intent; Easton was not familiar with the Newmarket area, and it is believed he got lost.