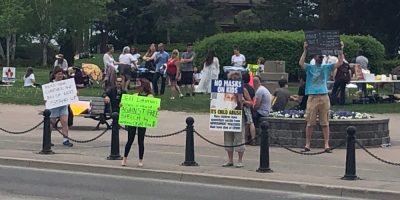 No speeches. No bouncy castles. But about three-dozen anti-lockdown protesters had a barbecue with them as they demonstrated early Saturday afternoon at Heritage Park in Barrie.

They waved placards at passersby on foot and in cars, exchanging pleasantries with drivers honking their horns and with cyclists ringing their bells in support, and thanking those who commented or gestured their non-support.

One placard-waving woman was heard saying she didn’t know if their protest would work, but she was having a really good time.

It’s not clear if the demonstration breached the spirit of an agreement between the two sides involved in a court hearing related to an injunction against such gatherings. They had agreed that no protests would be held pending the outcome of the hearing on May 27.