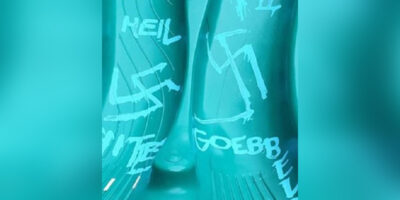 It took Barrie Police three minutes to arrest a suspect after a call came in about someone leaving behind hate-filled graffiti.

A concerned citizen called police at 12:26 Monday morning and provided a description of someone police were already familiar with. He was in custody by 12:29.

Barrie Police spokesperson Peter Leon tells Barrie 360 a suspect had a backpack filled with paint and brushes and was leaving anti-Semitic symbols on structures on Dunlop Street and nearby Berczy Park. “He was going along, painting graffiti on storefronts and at the park,” said Leon, adding the city has already removed the hateful language.

The suspect faces nine counts of mischief in connection to this. Leon says hate crimes charges are being considered as the investigation continues.