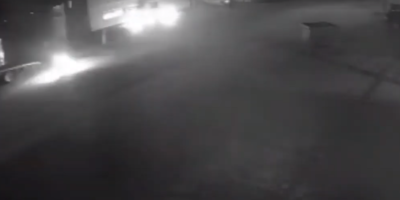 An early morning fire in Barrie has been deemed suspicious after it appears arsonists got caught up in their own flames.

Barrie Firefighters were called to an auto repair shop in the area of George Street around 3:30 Sunday morning and were able to quickly contain a fire, limiting damage to the interior.

Barrie Police and the Office of the Fire Marshal say it may have been intentionally set. Surveillance footage appears to show a dark-coloured vehicle arriving and parking a short distance from the garage before two people got out and approached the business.

Police say it appears the two set the fire but were caught in the flames in the process. They can be seen running from the business, one of them engulfed in flame.

Investigators believe the suspect would have suffered significant injuries that required some form of medical attention. Anyone with information can contact Detective Constable D. Watson at 705-725-7025 ext. 2755 or by email at dwatson@barriepolice.ca. If you wish to remain anonymous tips can be submitted to Crime Stoppers at 1-800-222-TIPS (8477), or leave an anonymous tip online at www.p3tips.com.