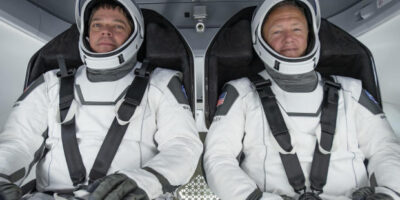 The U.S. is hours away from a series of firsts for the nation’s space program: the first manned orbital mission in nearly a decade, and the first using a privately owned and operated spacecraft. But the mission’s ability to launch will all depend on the weather.

The launch forecast is improving. For SpaceX and its Falcon 9 rocket, there’s a 60% chance the weather on the launch pad will cooperate for a moment in space history.

Along the U.S. eastern seaboard, seas are calm. That’s important, because in a launch crisis, the SpaceX capsule would ditch to safety in the Atlantic Ocean.

“It absolutely is a help,” Behnken said. “I think we’re way past the polite stage in our relationship.”

NASA hired SpaceX to design and build a new generation of spacecraft — and the Falcon 9 brings some new amenities to space travel. For starters, it’s reusable, which revolutionized rocketry by slashing costs.

Astronauts in streamlined suits will climb into a crew capsule with a retro look. But with all the new technology inside, Crew Dragon has been compared to a “Flying iPhone.”

CBS News spoke with SpaceX founder Elon Musk and NASA Administrator Jim Bridenstine. Musk described Behnken and Hurley as “cool as a cucumber,” and said they have “nerves of steel.”

“I sent them a text,” Bridenstine said. “‘If there’s anything you need me to do to stop this, I’ll stop this in a heartbeat’ … and both said, ‘We’re go for launch.'”

Musk told CBS News that early on, he gave his fledgling SpaceX company less than a 1% chance of succeeding — and now, it’s about to make history. The astronauts will likely spend at least six weeks aboard the space station. But Musk’s goal — everyone’s goal — is to launch them safely.