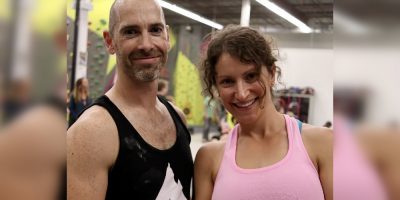 Days before Ontario’s vaccine certification system began, Mike Moore’s email inbox began filling up with messages, many of them profanity-laced, from individuals angry over provincially-mandated requirements that patrons be double-dosed against COVID-19 to access their rock climbing business.

Mike Moore owns Alt. Rock on Dunlop Street West, and he says the blitz of angry emails began Saturday after an electronic newsletter was sent to customers in their database explaining the new proof-of vaccination system.

“Within about an hour, we had about 20 negative emails, and they continue to roll in. I haven’t really kept count, but we’re up past 50, you know,” says Moore.

Beginning Wednesday, Ontario residents must provide proof they have been fully vaccinated against COVID-19 to enter non-essential businesses such as movie theatres, gyms, and restaurants.

Moore says the majority of emails are from people who believe the vaccine certificate system was a business decision rather than one made by the government. Most of the emails don’t include a name, but Moore says they are pretty consistent.

“They start with the fact they liked what we did at our facility and enjoyed it, and now we’ll be losing their business or losing the business of groups of people,” he says. “and usually some strong language like this is disgusting, unlawful, shameful, discriminatory, and we are segregating.”

Moore doesn’t want to comment on whether all the emails are from the anti-vaccine crowd, but he did go through their customer database and he found the vast majority were coming from infrequent visitors to his business and some from people who have never set foot in the facility. Only a handful of the emails, says Moore, have been from frequent visitors.

“But overall, the people that we communicate with and see on a daily basis are quite supportive, which is critical,” he notes.

For now, the emails have contained anger and profanity, no threats. Still, Moore says his staff are nervous.

“They’re very worried it will get to that point. I really hope it doesn’t. We’ve told them if they feel at all threatened they need to remove themselves from the situation and call the police. It’s in their mind and they are worried about it escalating to that point.”

When it comes to threats, police should be contacted. In enforcing vaccine certificate policies, however, Barrie Police spokesperson Peter Leon says the responsibility doesn’t fall to police, but rather the Health Unit. “When we have an issue involving local businesses and people that don’t want to comply with providing a “passport,” so to speak, they need to reach out to the health unit for direction and enforcement,” said Leon. “Police will respond to vaccine-related issues, issues and concerns that deal primarily with public safety, criminal activity, or other occurrences that are incidents involving trespass to property.”

“Again, it’s not a case of contacting the police when there are problems out in the community involving the vaccines,” he added.

Moore says many of the people who have sent angry emails want his business to support their beliefs.

“It’s sad people want to punish local businesses in an attempt to get us to stand up for their beliefs and their political purposes. What they might find is, at the end of it, those businesses that they claim to have liked at one point will be gone. The government won’t notice and this will have been for nothing.”

“Let me be very clear, this is a temporary and exceptional measure. And we will only use these certificates for as long as they are needed, and not one day longer,” said Premier Doug Ford on Wednesday. “So today, in the weeks ahead, it’s important that each of us remain patient, especially with business owners and frontline workers implementing the vaccine certificate. They’ve gone through so much during this pandemic, and deserve our support.”