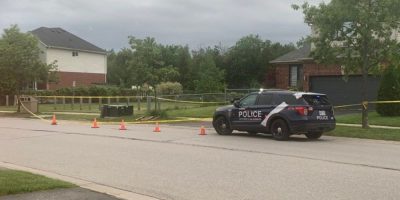 Two teens are facing numerous charges after a man was shot in the driveway of a south end Barrie home on Tuesday evening.

Shortly after 6 p.m., police responded to a report of a shooting at a residence on Country Lane near Mapleview Drive East. Police say the 25-year-old man was getting into his luxury sedan when he was approached by a male armed with a gun who wanted to steal the vehicle. As the man reversed out of the driveway, he was shot by the suspect. The victim managed to make his way to a gas station on Mapleview Drive East where he was taken by first responders to Royal Victoria Regional Health Centre, and from there was airlifted to a Toronto trauma centre with a serious, but non-life-threatening upper body gunshot wound. Police say the man was not a resident of the home.

Police say the suspects were taken into custody a short while later in the area of Innisfil Beach Road and Yonge Street. Investigators have determined the vehicle they were in had been stolen.

An 18-year-old Toronto man is facing 15 criminal code charges that include robbery, firearms and various assault-related offences. The other suspect, a 14-year-old Brampton boy, is up on charges such as robbery, firearms and possession of stolen property obtained by crime. Both males have a bail hearing on Wednesday.

Police say this was a targeted incident and remind citizens that personal safety is important at all times.

“Members of the public should always be aware of their surroundings and if confronted with an incident involving violence, where possible, remove yourself as quickly as you can from the situation and remember to never engage the perpetrator(s),” police said in a news release.