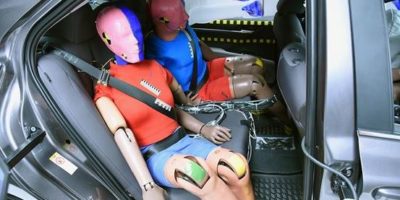 The Insurance Institute for Highway Safety (IIHS) released an alarming report about backseat safety on Thursday. The top highway safety group found that even in a head-on crash, you may be safer in the front seat than the rear seat.

Crash tests show up-front, belts automatically tighten while front and side airbags deploy, keeping people away from the steering wheel and dashboard. Those belts also have force-limiters to reduce the risk of chest injuries.

But in the back, there are no front airbags and seat belts lack those potentially life-saving features, making it possible for passengers to collide with parts of the vehicle interior. The safety group wants carmakers to make the backseat as safe as the front.

“What we’re finding is that the rear seat passengers in vehicles that do not have those technologies are often subject to more severe injuries than their front seat passengers in that same vehicle,” said IIHS president David Harkey.

IIHS looked at 117 front-end crashes where the backseat passenger was injured or killed but wearing a seat belt, and the most common injury was to the chest. Most of the 37 fatalities were in crashes that were considered survivable. Head injuries were found in nine injured backseat passengers and 18 fatalities.

IIHS is developing a crash test to evaluate crash protections for backseat passengers. The institute isn’t recommending specific changes yet to car makers.