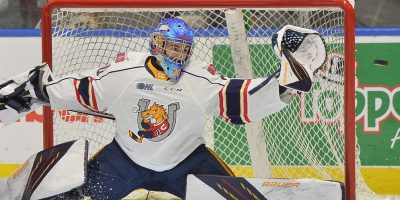 A rough start was more than a shorthanded, fatigued Barrie Colts lineup could overcome Sunday afternoon in North Bay.

Barrie gave up three goals a little more than 10 minutes into the contest en route to having its four-game win streak snapped with a 6-3 loss to the Battalion at North Bay Memorial Gardens.

Kyle Jackson, with two goals and an assist, and Brandon Coe, with a goal and two assists, had three-point efforts to lead the way for North Bay (39-18-3-3).

Dalyn Wakely, Michael Podolioukh, and Matvey Petrov also scored for the Battalion, which is just two points away from clinching the Central Division title.

Ethan Cardwell scored twice for the Colts (33-22-5-1) and now has seven goals and three assists for 10 points in his last five games.

Brandt Clarke also found the back of the net for Barrie, which now trails Mississauga by seven points after the Steelheads beat the Sudbury Wolves 5-3 on Sunday afternoon.

Barrie still holds four games in hand in the race for home ice in the opening round of the playoffs.

The Colts dug themselves an early hole and couldn’t get themselves out of it.

Rookie goalie Nolan Chartrand, who had a solid OHL debut in a 3-2 loss in North Bay on March 20, was called upon again with starter Mack Guzda injured and Matteo Lalama resting after having played in both previous games. Chartrand didn’t last long in this one.

The 17-year-old was pulled at 10:38 of the first and replaced by Lalama after giving up three goals on just five shots.

“Yeah, it hurts,” Colts head coach Marty Williamson said of the rough start. “You give up three like that and it’s making it tough. We played the rest of the game 3-3 and I thought our guys played hard right from the beginning.”

Having beaten London 5-4 in overtime at home the night before, the Colts had to board the bus at 8 a.m. the next morning to make the road trek to North Bay.

Not easy for a Barrie team playing its sixth game in less than nine days.

Things don’t get any easier down the final stretch. The Colts are in the midst of playing nine games in 16 days to close out the regular season

“We were a tired team,” said Williamson. “That will get you a bit and I thought it got us a bit (Sunday).”

A shorthanded lineup doesn’t help either.

Barrie will only have a day off before returning to action Tuesday night to host the Peterborough Petes in a COVID-19 makeup game.

While Williamson’s optimistic he could have a body or two back in the lineup, he’s in no rush to get players like Guzda back before they’re ready with the playoffs around the corner.

The coach isn’t rushing anything.

That means Lalama will once again be in the crease against the Petes. The 19-year-old rookie has played well during the busy stretch despite having been sick and not practicing all this week.

“He’s lost like 10 pounds, which is why we wanted him to get a day off, but it didn’t quite work out that way,” said Williamson. “I thought he went in and did a real good job for us. We’ll get him back in there for Peterborough.”

As for Guzda, there’s still no clear timetable for his return.

“We’d hope for that, but I really don’t know,” Williamson said when asked if his overager goaltender would be back next weekend.

ICE CHIPS: Former Colts coach Todd Miller, who was fired as head coach by Oshawa last month, will be back behind the bench with Canada at the 2022 IIHF World U18 Championships beginning April 21 in Germany. . .  Barrie outshot North Bay, 37-28. . . The Colts went 0-for-2 on the power play, while not giving up man advantages.  . . Del Monte celebrated his 20th birthday on Sunday.