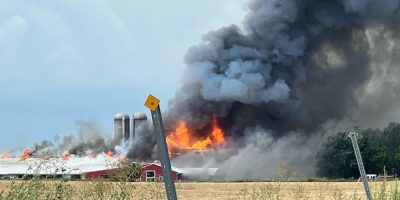 A fire continues to burn inside one silo on a County Road 27 farm property in Essa Township following Sunday’s massive blaze.

In an email to Barrie 360, Essa Fire Chief Doug Burgin says the loss between the buildings and contents including livestock is about $6 million. It’s believed that 52 cattle perished in the fire. Burgin says 140 cattle were saved by owners getting them out, and on Sunday, Barrie Deputy Fire Chief Carrie Clark indicated much of the herd was in the pasture when flames erupted.

The property is on County Road 27 just south of Barrie.

The fire in the silo is not a concern, according to Burgin.

“It’s not going anywhere and this is normal when dealing with silos,” he said in the email. “Once it is brought down safely we will assist the owner.”

Burgin indicated due to the level of destruction and that the fire is not considered suspicious, the Fire Marshal will not be attending.

There were no injuries to any people.

Simcoe County paramedics were on standby throughout the blaze on Sunday assisting firefighters who were battling not just the flames but the searing heat and humidity.

Burgin says the last of the hot spots have been put out.