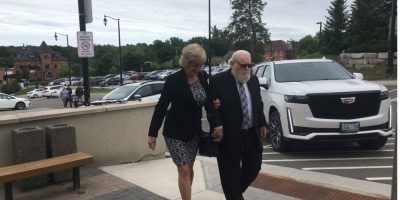 Wilson told the courtroom he was “left with reasonable doubt” regarding the case.

The judge stated that he had concerns regarding the stories and evidence from Sadlon, and the complainant, which led to him being acquitted.

“There’s a difference between the court of public opinion and the court of law,” defence lawyer Karen Jokinen told the media. “What somebody might have said, or thinks or heard through the grapevine, is not evidence.”

Sadlon was arrested in Dec. 2019 by Barrie Police.

He pleaded not guilty to the charge and on the witness stand denied the allegations made by a woman.

Her name cannot be released due to a publication ban.

During testimony, the woman said Sadlon made vulgar comments to her following a meeting, and when left alone in the room, hugged and kissed her, and grabbed her breasts.

The defence said that while the woman’s two colleagues could remember the lewd remark, neither recalled his hand gestures.