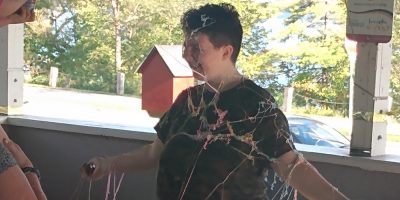 The symbolic gesture marked another milestone in the Barrie teen’s journey and battle against leukemia. Those in attendance wore masks and were served cake to celebrate the event with Jacob. Those who could not make it were encouraged to mark the occasion by playing The Tragically Hip song “Fiddler’s Green” at 5 p.m.

“Jacob turned 13 on May 21, 2019,” says Jacob’s mom, Sherry. “Three days later I took him to the clinic because he was having flu-like symptoms, so I thought he had the flu. We got a call from the clinic to get blood work done. The clinic then called us and told us to get to RVH(Royal Victoria Regional Health Centre) because he needed a blood transfusion.”

It was midnight when Sherry and Jacob arrived at RVH. Hours later, they were told the devastating news that Jacob was being taken to Sick Kids because he had leukemia.

Sherry says they spent most of a better part of a year at Ronald McDonald House while Jacob was undergoing treatment at The Hospital for Sick Children in Toronto.

The challenge was magnified when COVID-19 hit. But the cancer treatments continued.

Those treatments proved even more challenging for Jacob as he had allergic reactions to some of the medications they gave him. So, blood transfusions that would normally last five hours were double that because they gave it to him slower. The spinal taps Jacob received became more complicated. Rather than having the lumbar puncture’s done in a dedicated room where other children would go, he was taken to the operating room.

“He just endured everything,” says Sherry. “He’s got scars from the top of his head to the tip of his toes from the things they had to do to him. It’s just incredible.”

Through tears, Sherry says Jacob is her warrior.

“Everybody in the hospital knew him, and knew his good nature and how funny he was,” says Sherry. “The nurses just loved that he took everything in stride. He just made it a joke and laughed at everything, when he should have been crying.”