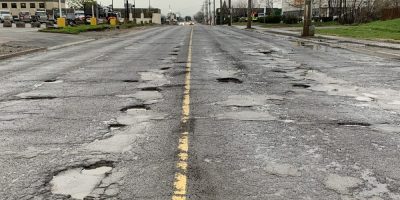 And the worst road in Ontario is…

No roads in CAA’s Central Region – which includes Simcoe County, Muskoka, Grey, Dufferin, and Bruce Counties – made the top ten for Ontario.

But within that group, Laclie Street in Orillia was voted the worst, followed by Essa Road, Huronia Road, Duckworth Street and Lockhart Road in Barrie. Bell Farm Road in Barrie topped the local list last year.

“We know the campaign works. People vote in the annual CAA Worst Roads Campaign because it gives Ontarians a platform to continue putting pressure on various levels of government to understand what roads they believe are in urgent need of repair,” said Teresa Di Felice, assistant vice president, government and community relations, CAA SCO. “The campaign has been able to demonstrate that decision-makers are paying attention to the results, which has prompted municipal officials to move up infrastructure projects in their communities.”

More than 180 municipalities had roads in their communities nominated. Drivers accounted for the majority of the votes cast, with cyclists and pedestrians accounting for about a quarter of the votes.

Primary reasons for selecting a road were potholes (80 per cent), poor road maintenance (71 per cent), and no or poor cycling infrastructure (29 per cent).

“This year’s Worst Roads campaign once again solidified the fact that although much work has been done across the province to maintain and repair Ontario’s roads, greater investment is needed to tackle the staggering municipal infrastructure deficit in Ontario,” says Bryan Hocking, CEO, Ontario Road Builders’ Association. “Building and maintaining infrastructure is a critical part of Ontario’s long-term economic plan, and even more important to our economic recovery from the COVID-19 pandemic. We must begin to build the necessary infrastructure today, so we can be ready to meet the challenges of tomorrow.”