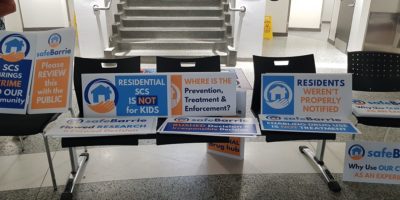 Barrie council has opted for more information before deciding whether to give a downtown supervised consumption site a final assent.

The additional information would come by way of a third-party private consultant on which council will devote $50,000, according to Councillor Mike McCann, who made his stance on an SCS clear. “I have a fundamental problem with having injection site anywhere in our city.” His amendment to the SCS application process at Monday night’s council meeting means this private consultant would not only pour over the application for the SCS, but also examine other supervised consumption sites across Canada. Whomever this investigator would be would have until October to complete this review, after which city council would be expected to make a final decision on the application.

Mayor Jeff Lehman was among the minority in a 6-4 vote on the move, saying it goes against good advice. “Look, if you’re opposed to something, just say no. Don’t defer it, don’t put it in the hands of an un-elected outside investigator under the assumption that they will somehow provide better information than the medical experts in your own community.” The SCS application is being championed by Dr. Lisa Simon, the Associate Medical Officer of Health for the Simcoe Muskoka District Health Unit.

Lehman adds the instruction from city council is too vague, especially given the short turn around time. “I’ve never heard of a supervised consumption site consultant. I’m not aware there’s an industry to review these applications. I believe there are knowledgeable people out there.” said Lehman at Monday’s meeting. “But there’s nothing close to a scope of work here.”

Deputy Mayor Barry Ward says a delay in approving this application means lives could be at risk. “We have a serious drug problem in Barrie, one of the worst in the province. It already exists, I don’t think we can pretend it doesn’t exist. The supervised consumption site, it should have been in place months ago, we would have saved lives. The sooner we can get it in place, the sooner we can save lives.”

The vote to defer this decision would come as welcome news to Rowley Ramey. The Seasons Centre for Grieving Children Managing Director is also a member of the grassroots organization Safe Barrie, and stood in opposition to the site’s proposed location. He said any decision in favour of such a site is premature. “I think there’s been a lot of effort put forward, but I don’t think the consultation has been fulsome. I don’t believe it has been a true 360 degree look. If I just use their own report in of itself, it says fifty per cent of the people are in favour, and fifty per cent of the people aren’t in favour.” Safe Barrie is formed by local residents and businesses that had previously called for delays in approving the SCS application. The Seasons Centre, a support service for children coping with death, is two blocks away from the proposed SCS location.

Ramey adds that if the time comes to introduce an SCS to the area, the community has to be included. “When Barrie puts a supervised consumption site together, that we do it in a responsible way, that we do it in a consultative way. Right now, we’re not understanding those connections in a meaningful way, and therefore, we’re concerned.” He adds Safe Barrie isn’t against an SCS on its face. “We agree a safe consumption site within a parameters of the site, couldn’t be any better for a drug user. What we’re uncomfortable about is the impact it has in and around the site.”

This isn’t the first time council has voted to wait for more information. At a June 3rd meeting, councillors opted to delay a vote to approve the application, opting to seek more location options over the proposed 90 Mulcaster Street facility. The decision to hold it there was held firm by the applicants.

City staff will now be tasked with looking for a consultant fit for the task, with a report on the whole issue expected back in October.