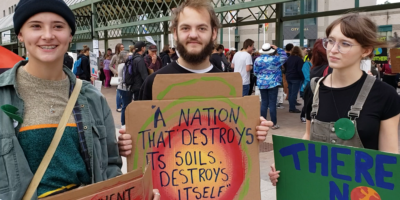 A gathering at Barrie City hall began at noon Friday, marking only one of the countless rallies across the globe fighting against climate change.

The Circle in the Square at Barrie City Hall is packed with youth and adults alike, all participating in a global rally against climate change. pic.twitter.com/6ty0vMsvrT

Those participating in the Barrie event were expected to gather at City Hall before marching to the MacLaren Art Centre for speakers, artists, and musicians, all meant to be a show of solidarity and to raise awareness of the effects of climate change.

Today's Global #ClimateStrike has participants marching from Barrie City Hall to the MacLaren Art Centre for a rally, with speeches, musicians, and demonstrations expected, in a show of solidarity for participants around the world. pic.twitter.com/Bw1EtyrdEK

This is a non-partisan event being led by students, individuals and local ­grassroots organizations.