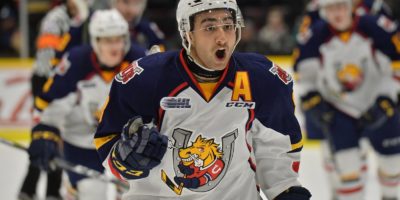 The wheeling and dealing continues for the Barrie Colts. The Colts have sent forward Lucas Chiodo to the Ottawa 67’s in return for a 3rd round pick in 2021 (SSM) and a 2nd round pick in 2024 (KGN), along with the rights to forward Shaw Boomhower. Boomhower has been playing with the Cincinnati Cyclones of the ECHL. This move comes after the sent Joey Keane to the London Knights in late December and moved Jaden Peca to the Sault last week.

Chiodo was originally a 15th round pick for the Colts, but flourished within the organization. The Churchill, ON native has 50 points in 39 games this season. The trade gives Chiodo a chance at a Memorial Cup in his final season of junior hockey, as the overager joins an Ottawa team that currently sits at the top of the eastern conference standings.

[perfectpullquote align=”full” bordertop=”false” cite=”” link=”” color=”” class=”” size=””]“The Barrie Colts would like to thank Lucas for his contributions to the hockey club and the community over the years. We would like to wish him the best of luck as he finishes his overage season with the Ottawa 67’s [/perfectpullquote]

Barrie is back in action tomorrow night as they play host to the Sudbury Wolves at 7:30pm. Tickets are available here