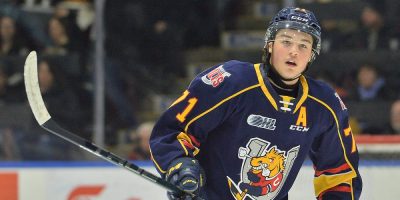 Ask Marty Williamson about Barrie’s recent signing of Oskar Olausson and the Colts general manager and head coach can hardly hold back his excitement.

The 28th overall pick of the Colorado Avalanche in this year’s 2021 NHL Entry Draft, the 18-year-old Swedish forward is an elite scorer who some hockey pundits considered a steal at where he was selected.

Add him to a lineup with Philadelphia Flyers 2020 NHL first-round pick Tyson Foerster and the Colts could have the most prolific scoring duo in the OHL this season.

The six-foot-two, 181-pound forward was a member of the HV71 organization, playing with the J20 SuperElit (14 goals and 13 in 16 games) and Swedish Hockey League (four goals and one assist in 16 games) teams.

The Stockholm native, who has already inked an entry-level deal with the Avalanche, also represented Sweden at the 2021 IIHF World Junior Championship.

“Every time I watch him he scores goals,” said Williamson, whose OHL club opens training camp on Monday at the Sadlon Arena. “Obviously he’s a different shot than Tyson being a left shot, so we’ll have to adjust some things, but we’re very excited to have him.

“It gives us another really talented player in our lineup.”

The question remains will the addition of Olausson give Barrie two of the league’s top snipers or will the Swedish winger help the Colts replace the loss of Foerster’s offence if he makes the jump to pro hockey.

Foerster’s success in the American Hockey League last season with the Lehigh Valley Phantoms – the Flyers’ AHL affiliate – has served notice he could be ready for the pro level.

The six-foot-two, 190-pound winger had 10 goals and 7 assists in 24 games and those numbers would likely be even more impressive had he not had to deal with a pair of major injuries.

Foerster suffered an early-season tibia microfracture and then a late-season separated collarbone that forced him to miss the majority of the games with the Phantoms.

While a normal season would have seen Foerster having to ply his trade with either the Flyers or down in junior with Barrie, that all changed when the OHL cancelled its season because of the COVID-19 pandemic.

NHL teams were allowed to place some of their top prospects under 20 years of age in the AHL and now reports are the NHL is putting the finishing touches on an agreement that would allow junior eligible players who played 20 or more games in the AHL last season return to the AHL this season.

“We don’t know 100 per cent which way Foerster is going to go,” Williamson said. “There’s a chance we’re going to lose him and getting Oskar is a huge add if you got to replace (someone like Foerster), but Oskar comes close and that’s what we’re happy about.

“If we happen to get Tyson back, then it’s a happy day. With both of them, we can score a lot of goals, that’s for sure.”

Of course, Foerster, who had 36 goals in his last season with Barrie, could make that decision unnecessary if he has a terrific camp with Philadelphia and makes the NHL club to start the season.

“We’d love to have Tyson back with us, but if he plays well enough that he earns a place up there (with the Flyers or Phantoms), then God bless him,” Williamson said. “That’s what you want to see. Kids taking that next step and fulfilling their dreams of playing pro hockey.”

With the recent commitment of Vegas Golden Knights prospect Artur Cholach, the Colts have now filled both import spots on the roster.

The big six-foot-four, 201-pound defenceman from Lviv, Ukraine was Barrie’s third overall pick in this year’s import draft and a sixth-round selection of the Knights in the recent NHL Entry Draft.

“With Artur playing in the U.S previously, his English is very good which helps with the adjustment to our team,” Williamson said. “We are very excited to have Artur join our team and we look forward to helping him continue in his development.”

Williamson admits the Colts were actually looking at taking  Olausson with their third overall pick, but the uncertainty of him coming over to North America to play at the time of the import draft led them to make the safe pick of Cholach.

“We had flirted taking (Olausson) at No. 3 overall then got kind of wind that Oskar wasn’t sure which way he was going, so we decided to roll the dice a little bit and take the defenceman,” the Colts head coach explained. “With Artur, we knew we were getting a real solid player there and then when it came around to the second pick, Oscar was still there, so we grabbed him, and it’s turned out to be a home run for us.

“To get both guys signed is a great thing for the franchise.”

Both Olausson and Foerster are not expected to be there on Monday at the opening of camp.

The Avalanche have yet to decide whether Olausson will head straight to NHL camp with them or head to Barrie.

Foerster, who missed the Canadian National Junior Team Summer Showcase in late July after tweaking his shoulder, is heading to the Flyers Development Camp from Aug. 28 to Sept. 1 at the team’s training centre in Voorhees, New Jersey.

ICE CHIPS: The Colts made a trade Thursday, sending blue-line prospect Ryan Pryce to the Sarnia Sting in exchange for a conditional 2024 OHL sixth-round pick. . . Keith Kling was named the team’s new Head Athletic Therapist and Morgan Payne has been named the club’s Head Equipment Manager.