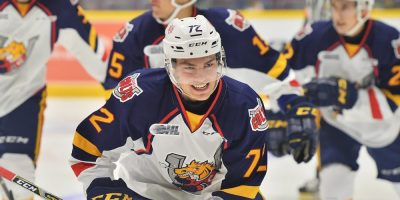 On a night where Nathan Allensen was playing his final regular-season home game in a Colts jersey, the veteran defenceman’s thoughts went back to those first days five years ago when he arrived in Barrie as a fresh-faced rookie.

“I can remember, to this day, TJ Fergus, Aaron Luchuk and Justin Murray, all those guys telling me time flies by,” said Allensen, who was honoured by the OHL club Thursday night at Sadlon Arena in pre-game ceremony with fellow overagers Mack Guzda and Anthony Tabak, along with Tyson Foerster and former captain Luke Bignell.

“You kind of just laugh it off, say, ‘Yeah, whatever,’ but obviously five years later it really does fly by and you just take it in every day.”

While the Colts would fall 5-1 to the Hamilton Bulldogs, it couldn’t put a damper on a special night recognizing the players whose OHL careers are winding down.

The five Colts were joined by their parents and families at centre ice before the game where they received their own framed jersey, but perhaps more importantly a nice ovation from fans who recognized their efforts over the years.

“It’s a nice touch to get recognized here,” said Allensen. “I just remember coming to the rink as a 16-year-old and being a little rookie. Time flies by, and it’s pretty special I got to do it with the same organization my whole five years.”

Tabak started his career with the Sudbury Wolves and then was dealt to the Sarnia Sting, before finally being acquired by Barrie midway through the 2019-20 season.

The 20-year-old admits his junior career has gone by in what seems the blink of an eye.

“It definitely goes by quickly,” he said. “It seems like yesterday I was a first-year rookie looking at the OA’s thinking, ‘Holy, that seems like a long ways away.’ Being in that position, it goes by in a blink.”

While the contest meant nothing in the standings for Barrie or Hamilton, it was a night these players won’t soon forget.

“Absolutely. For all of them, but especially for (Allensen) who has been here for five years,” said Colts associate coach Chris Dennis, who stepped in for head coach Marty Williamson who was away at his father’s funeral.

“That’s quite an accomplishment and given what’s happened the past two years to kind of look at it and understand this chapter of their lives is closing, it’s special for them. The guys wanted it for them and I thought they played hard tonight.”

Allensen became a fan favourite over his years with Barrie fans. A character player who wore his heart on the sleeve, the Waterloo native developed into a leader on and off the ice.

A fine example for his younger teammates.

“I learned from some of the best,” said Allensen, who enjoyed a career year in his final season with 14 goals and 38 assists for 52 points in 65 games. “We had great captains in Justin Murray, Jason Willms, and obviously (Bignell) as well.

“Just learning what I did from the older guys and just trying to put it in my game and my leadership off the ice. Hopefully, these younger guys can learn from me and do it as well.”

While Barrie (33-27-6-1) would drop its seventh-straight contest, they were facing a team that sits atop the OHL standings and has now lost just once in its last 13 games.

Cooper Matthews had the lone goal for the Colts, who gave up three power-play goals in what was really the difference in the game.

“We played with the best team tonight,” said Dennis. “If you take the special teams away – now obviously you can’t – they scored three and we scored none. That’s not good enough, but it’s a 2-1 game outside of that. For the most part, I thought we managed pucks well. There were no huge mistakes for turnover goals, no individual errors that really cost us.

“They’re just a good team that makes plays. That’s what we’re up against if we want a chance to win this thing. It probably goes through them and we got one final look at it before the playoffs start.”

The Colts wrap up their regular-season schedule on the road against the Niagara IceDogs on Saturday night, before kicking off their best-of-seven first-round series against the Steelheads next Friday in Mississauga.

While it’s been a bit of a rough finish to the year, Allensen is determined to make this final season last as long as possible.

The assistant captain knows there’s much more to this team than what they’ve shown over this last tough stretch.

“Everyone in this room knows what we’re capable of, we just got to get over this hump here,” he said. “I think the playoffs are a fresh start, everyone is excited about that. It’s been a long regular season, a lot of ups and downs, we’re just keeping our heads up, keeping positive, and looking forward to that first game against Mississauga.”

The schedule for the first-round series against Mississauga is: