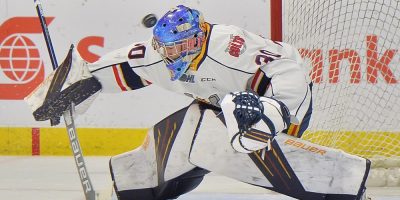 What started as tough day for the Barrie Colts didn’t get much better Tuesday night in Mississauga.

After finding out starting goaltender Mack Guzda was injured and then learning later in the afternoon captain Brandt Clarke received an eight-game suspension for a hit in a game last Thursday, a controversial early power-play proved the difference in a 5-3 loss to the Steelheads at the Paramount Fine Foods Centre.

After Mississauga’s James Hardie scored the first of two for the Innisfil native, and Barrie’s Even Vierling traded goals a little more than seven minutes into the game, the tables turned on an altercation between Jacob Frasca and Luca DelBelBelluz that resulted in a five-minute power play for Mississauga (33-18-1-5).

While Frasca was handed a minor for blindsiding, a major for fighting, and a game misconduct, Mississauga’s DelBelBelluz received just a cross-checking minor.

Owen Beck and Hardie scored on the ensuing power play as the Steelheads, with another goal from Kai Schwindt, rolled to a 4-1 lead and never looked back.

“They (refs) called it a one-man fight,” said a disappointed Colts head coach Marty Williamson. “I don’t get it. I don’t understand the call, but I’ll have to get an explanation from the league on it.”

Barrie (28-20-4-0) had numerous chances, but other than an early goal in the second by Connor Punnett and a late goal by Chris Grisolia with 29 seconds following an insurance marker by Mississauga’s Zakary Lavoie, the two power-play goals would prove to be the difference.

“I thought we were the better five-on-five team for the majority of the game,” said Williamson. “I didn’t mind our game obviously than the questionable call and then we don’t do a good enough job on the penalty kill.

“Take a penalty like that, you got to find a way to get through it and (instead) give up the two goals and that was the difference in the game.”

Punnett felt he and his teammates deserved better on the night for their effort.

“Obviously it’s tough to see a guy like Frasca go out like that,” said Punnett, who will suit up in his 100th game on Thursday at home against the Niagara IceDogs. “We think different, but I guess that’s the way it is sometimes, and it sucks that happened.

“Five-on-five we played really well together and we played strong, and I was proud of the guys. We didn’t fall apart.”

There have been plenty of tough days for Barrie this season on the injury and suspension front and Tuesday was no different.

Williamson was forced to bring in emergency call-up Keegan Jackson from Jr. B Welland with both Guzda and rookie backup Matteo Caruso injured.

Jackson, who has also been called up by both Erie and Kitchener this season on emergency stints, is also expected to backup Matteo Lalama at least for Thursday’s game.

“We’re not sure right now,” the Colts bench boss said when asked about Guzda’s return. “He got banged up in practice, so he’ll get checked out (Wednesday) and we’ll find out what kind of time frame we’re looking at”

Later in the day, the OHL announced Clarke would miss six more games before he can return on March 27 after a check to the head major and game misconduct on Hamilton’s Jan Mysak.

“We now know Brandt has got eight games and we got to get through without him,” Williamson said. “We’ll find out about Frasca here and we got to go back to work. Nothing is coming easy for us right now.

“We got a couple of hard-fought victories and we took a bit of a wash here on an isolated incident and we got to go play 60 minutes against the IceDogs and bounce back.”

The Colts had several good chances to score Tuesday night, but Mississauga goalie Joe Ranger made several huge stops to hold the fort.

He robbed Hunter Haight on a two-on-one, stoned Declan McDonnell on a breakaway and then caught a break when Anthony Tabak rung one off the crossbar.

“There was no quit in us,” Williamson said. “We went out in the third too and had some chances. I thought the first period could have been 4-4, we missed golden opportunities.

“It wasn’t a lack of chances. Credit to their goalie and the difference is the five-minute penalty.”

“Ranger played good tonight,” said Punnett. “Obviously it sucks for us, we want to score goals and win a game, but hats off to him for playing a good game. We got our chances and sometimes you don’t get the bounces your way in a night.

“I think that’s what happened to us tonight and we’ll have to a good practice (Wednesday) and come out Thursday at home ready to play.”

Game time against the IceDogs at Sadlon Arena is 7:30 p.m.

ICE CHIPS: The Colts will be sporting their traditional St. Patrick’s Day green jerseys on Thursday. The tops will be auctioned off online. . . Tabak recorded an assist to extend his scoring streak to eight games (1-11-12). . . Matteo Lalama stopped 29 shots in goal for Barrie. . . Evan Vierling has at least a point in 15 of his last 17 games (10-9-19).