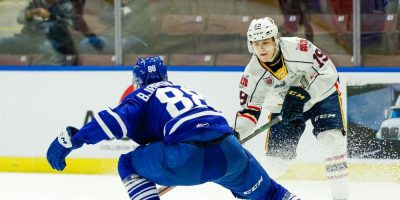 Evan Vierling and Declan McDonnell made sure the Barrie Colts didn’t let an outstanding, gutsy effort in net by Mack Guzda go to waste Friday night in Mississauga.

McDonnell set up Vierling’s overtime winner at 16:24 and Guzda, who fought off crippling cramps late in the third, made his return to the crease for the first time in nearly a month a memorable one to help the Colts edge the Steelheads 2-1 in the opening game of their OHL first-round playoff matchup at Paramount Fine Foods Centre.

With Guzda shutting the door at one end, McDonnell and Vierling stepped up in overtime at the other to help the Colts steal home-ice advantage.

McDonnell slipped the puck past Mississauga defenceman Ethan Del Mastro at the blue line and then fed it across to Vierling who tipped it past Roman Basran as he charged to the net.

“It was a great play by my linemates,” Vierling said of the winner. “Declan was able to get through one guy and then he made a great pass to me cutting through and I was able to bury it.”

That ensured Guzda would get rewarded for his sparkling 38-save performance.

The Florida Panthers prospect, who was out with an unspecified injury and had played in just three games since March 12, sparkled in his return.

After giving up a goal off a rebound to Innisfil native James Hardie just under seven minutes into the game, Guzda slammed the door shut.

“It was unreal. Really a big effort,” Colts head coach Marty Williamson said of the overager’s performance between the pipes. “The cramps were getting to him and for a guy who hasn’t played much hockey in the last month to come in under this kind of pressure and make those saves was something.

“The first one went early on him and he really shut the door for us.”

Guzda, who pulled himself after the first period in his last start against Sudbury back on March 31, looked like he wouldn’t make it through this game either when he went down in heap in the crease with just under five minutes remaining and the game tied 1-1.

The goalie got back up, only to go down again. He struggled as play continued. Head athletic therapist and strength coach Keith Kling worked with Guzda while backup Matteo Lalama frantically prepared to come in.

After a lengthy delay, the cramp settled down and Guzda was able to continue.

“We got the break there when he went down,” said Williamson. “We really appreciate the referee gave us some time. Cramping is a bad thing. He couldn’t bend his leg. That’s why he looked so awkward there.

“Luckily we got a day-and-a-half before we play again, so we’ll get him all hydrated up and run him back out there.”

Guzda had to be sharp early on. A slow start resulted in Barrie trailing early and being outshot 11-3 after 20 minutes.

Guzda though would hold the fort and Barrie would tie the game early in the second on a goal by Ethan Cardwell off a two-on-one with Hunter Haight.

The rookie’s cross-slot feed was right on the tape and Cardwell fired it past Basran to even things up.

“I think the first period there were some nerves,” said Vierling. “It’s a lot of guys’ first playoffs. After the first, I thought we regrouped and it helps having Guzda back there to bail us out.”

While the Colts got stronger as the game continued, they were hesitant in overtime before Vierling’s winner.

“I thought in the overtime we sat back a little bit and we were playing prevent rather than making things happen,” said Williamson. “We got things to work on. It’s a chess match. They’ll give us a better game and we got to be better.

Taking those chances upfront is easier with a goalie like Guzda backing you up, says Vierling.

“It brings so much confidence to our team,” he said. “We know that he’s going to make some big saves for us. It’s really hard for teams to get more than a couple of goals (against him), so he gives us a chance to win on every night.”

That the game was this close was no surprise to Williamson. He expects that to continue Sunday and throughout the series.

“There could be four of these games. There could be five, there could be seven,” he said. “This is going to be a tight series. I don’t see anybody blowing out anybody. As long as you come prepared ready to battle.”

Vierling knows the Colts can’t be satisfied with just this win. A split on the road is nice, but they can’t afford a letdown on Sunday.

“We want to keep the foot on the gas and not give them anything and keep this winning going,” said the New York Rangers prospect.

ICE CHIPS: Williamson praised the play of McDonnell who was a force all night. “Mac had a real good jump in practice all week. He’s a battler,” said the coach. “There is a reason he was voted in the (OHL Coaches Poll) as one of the hardest workers. You love guys like that in big games like this. They come up and play. Nothing scares them.” . . Mississauga outshot Barrie 39-26. . . The Steelheads rung one off the crossbar in overtime. . . Mississauga’s power play went 0-for-3, while Barrie came up short on its two chances. . . Roenick Jodoin and Kevin Niedenz were healthy scratches for Barrie. . . Game 3 is back in Barrie on Monday night. Game time at Sadlon Arena is 7:30 p.m.