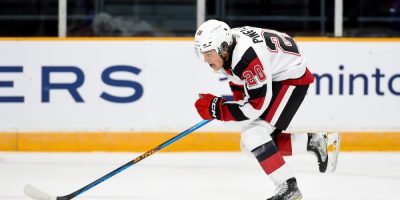 In a game that was like a chess match, the Ottawa 67’s showed the Barrie Colts that patience is the kingmaker.

A strong three-goal third period proved checkmate in this one, as the OHL’s top team pulled off a 4-1 win over the Colts, Thursday night, at Sadlon Arena.

Tied 1-1 heading into the third period in a contest where they were being outshot 30-17 and outchanced, a patient 67’s squad made their move.

Luca Pinelli scored the winner just 1:34 in when Cameron Tolnai won the faceoff back to Anthony Costantini and the blueliner slid it across the top NHL prospect who wired it past Anson Thornton.

The 67’s then delivered the dagger on the power play with five minutes remaining when Pavel Mintyukov found Brady Stonehouse streaking alone down the left wing and he fired it past Thornton.

Frankie Marrelli sealed it with an empty-netter with 2:04 remaining.

“I just thought we flinched first,” said Colts head coach Marty Williamson, whose club had its five-game win streak snapped. “We made too many mistakes at the end. A faceoff play (on Pinelli’s winner) that we knew about and didn’t cover well enough and then we don’t get the puck out on a penalty and it ends up costing us, so that was kind of the difference in the game.

“We knew it was a chess match when you play these guys. They don’t give up a lot. For the most part, we played pretty sound defensively, but we made a couple of mistakes.”

Barrie (23-11-4-2) opened the scoring at 12:07 of the first period when Tyler Savard came around the back of the net and skated back to the high slot before spinning around in the middle and firing a shot past a screened Ottawa goalie Max Donoso.

Jack Matier tied things up on a point shot through traffic five minutes into the second. Despite several good scoring chances in the middle frame, the Colts couldn’t bury them and Ottawa lay waiting.

“It was just a chess match, really,” said Colts forward Beau Jelsma, who set up the screen on Savard’s goal. “Both teams are very good and they came down and capitalized on their chances and we didn’t, so we got to be better.”

The 67’s (31-7-1-1) have given up the league’s fewest goals (95 in 40 games) and showed why Thursday. They give opponents little time and space and an opportunistic offence patiently waits for their opponents to make mistakes.

When Ottawa needed to, they stepped up in the third. This, without injured top forwards Logan Morrison, Vinzenz Rohrer and Tyler Boucher in the lineup.

“We talked about the chess match,” said Williamson. “I just thought our patience got tested and we started complaining about too many things, whether it was the fire alarm (that went off several times, delaying the game in the second perioid), the refereeing or whatever.

“Things like that can’t bother you. You got to stay focused and then we get sloppy on a faceoff play, sloppy on a penalty kill and suddenly it’s 3-1 and you’re not coming back on them.”

The Colts are coming to an end of a busy stretch, but first, they face another stern test when the Windsor Spitfires, the top team in the Western Conference and fresh off a huge trade deadline that included the addition of Canadian National Junior Team captain Shane Wright, arrive in town Saturday night.

“This is kind of the end of our stretch of six games in nine days and it’s been a busy schedule,” said Williamson. “Let’s get through this and we get a full week off before the following weekend, but we want to finish on a high.

“We got a great (Windsor) team coming in. They won again (6-3 over Erie) fairly soundly tonight. They throw a whole different test at you than Ottawa. A very solid offensive team. They can throw a lot of weapons at you.”

Just like Ottawa, the Spitfires can bury your mistakes and the Colts will have to limit those if they want to pass this test.

“You really do. It’s playoff hockey,” said Williamson. “It’s one opportunity here and there. I imagine if we ever see these guys (Ottawa) in the playoffs it’s about one goal here or there. I didn’t even like the first goal. I thought we gave the puck away a couple of times and I don’t know if it was a screen or what happened on it, but we kind of gave them a couple of things and it just doesn’t work against them.
“They had a couple of guys out of the lineup too that were nice weapons. There’s a reason they’re in first place and we now know what the test is ahead of us if we play them again.”

After a tough loss, Jelsma is excited about the next challenge he and his teammates face.

(Tip of the hat) to them, they’re a real good team,” he said of Ottawa. “I thought we played a good game overall, but just didn’t get the bounces tonight. We just got to take this one with a grain of salt and come back Saturday for a big one.

ICE CHIPS: The fire alarm in the rink went off numerous times in the second period, delaying the game five times. . . Donoso, who made 36 saves, picked up his 21st win in goal, second to only North Bay’s Dom Divinentiis (22). . . Thornton, who faced 28 shots, had his eight-game win streak snapped. . . Ottawa was 1-for-3 with the power play, while Barrie was 0-for-3. . . Brandt Clarke (4-5-9) was held off the scoresheet for the first time in five games since returning. . . The 67’s had six rookies in the lineup and still cooled off the Colts who had just one regulation lost in 17 games coming into last night.