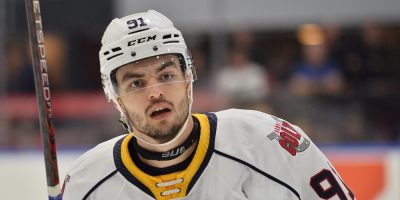 On a special night, with his mom watching him play for the first time in Barrie and more than 50 Ukrainian refugees in attendance, Artur Cholach knew he couldn’t let them down.

Almost a year after Russia brutally invaded his home country, in a war where so many fathers like his own stepped forward to defend their home, the Novoyavorivsk, Ukraine native capped off an emotional evening by scoring with less than 16 seconds remaining in overtime to give the Colts a thrilling 3-2 overtime win over the Ottawa 67’s, Thursday night, at Sadlon Arena.

The evening began with the singing of the Ukrainian national anthem and a special ceremony to honour the refugees before Cholach completed it the best way he could as a hockey player by scoring the game-winner.

“That’s special for me and for her,” the 19-year-old defenceman said before meeting up with his mom outside the Colt’s dressing room after the game.

Colts head coach Marty Williamson turned to one of his assistant coaches after the goal and told him it was pretty fitting that Cholach got the winner tonight.

“I just met (Artur’s mom) and she’s a wonderful lady and it just makes it such much more enjoyable for her,” Williamson said of her getting to see Artur be the hero. “It’s a long flight over and everything. The whole ceremony was fantastic and then to have it end like it did.

“They’re going through things we can’t even understand, Mrs. Cholach and her husband and Artur with his dad. It’s so nice to have his mom over here and then to see good hockey with a game like that is just icing on the cake.”

On the three-on-one that led to his winning goal, Cholach was actually pointing to trailing teammate Callum Chisholm and trying to get centre Evan Vierling to slide the puck back to him.

Instead, the overage forward threaded a perfect pass through the skates of Ottawa defenceman Henry Mews across to Cholach who fired it past goalie Collin Mackenzie to extend Barrie’s (18-9-4-2) point streak to 11 games and hand the OHL’s first-place club only its eighth loss in 34 games this season (26-6-1-1)

“That was a really good play by Vierling,” Cholach said of the veteran centre who extended his own point streak (9-10-19) to nine games. “I thought (Mews) from Ottawa was covering me and so that’s why I was pointing at (Chisholm) and he could just rip it, but Vierling made a hell of a play.

“He made a pass through the defenceman’s legs and I just had an empty net, so it was an easy goal.”

Ethan Cardwell and Beau Jelsma also scored for the Colts, who got another strong 35-save performance in goal from Anson Thornton, who was recently named the OHL Goaltender of the Month for December.

Chris Barlas and Caden Kelly scored for the 67’s, who got 29 saves from Collin MacKenzie in net.

In a game seen as a test for a streaking Barrie team against league-leading Ottawa, it lived up to the hype with both teams playing good hockey in a tight contest where little time and space was available for either side.

“We had a bad line change on one of the goals, but I thought we battled all night,” said Williamson. “I thought we limited the chances and got a couple of big saves from Thornton. We had chances to score a few more goals and that’s kind of the way they play.

“I said from the beginning that’s a good hockey team over there and we better bring our ‘A’ game and better be real responsible away from the puck, and I thought we were for most of the night.”

Cholach said it was nice to pull out a win in a tooth-and-nail battle against a very good Ottawa team.

“Every game we try to win, try to get those two points and Ottawa is first place in our conference, so that’s even more motivation for us,” said the Vegas Knights prospect. “It was a good crowd today. The fans were motivating us and we just couldn’t lose.”

Barlas had the lone goal of the first midway through the period when his shot over the glove of Thornton snuck in off the far post.

Barrie evened things up just 1:59 into the second on their own impressive snipe, when Cardwell’s shot from a bad angle beat MacKenzie upstairs over the shoulder.

Jelsma then put Barrie on top midway through the second when he finished off a cross-crease feed from McDonnell for his 14th of the year.

Ottawa would tie it with a little less than eight minutes remaining when he deposited a feed from Thomas Sirman past Thornton.

But Cholach and the Colts came through in showing that they can compete with the best in the OHL when they play smart, defensively sound hockey.

“That’s the strongest message,” said Williamson, whose club travels to Mississauga on Friday night, before returning home Saturday night to host Niagara and wrap up a three-in-three weekend. “We were a sloppy team early in the year and we didn’t care enough about defence and now we’re just a much more responsible group of guys. This whole weekend is a good test for us, because now we had a good game against Ottawa and let’s go out there and play good periods.

“We got nine of them and we had three good ones tonight. Now let’s go play three more good ones against Mississauga.”

The night also marked the Colts debut of winger Tyler Savard, who was acquired earlier this week from the Sault Ste. Marie Greyhounds.

Savard was strong all night playing on a line with Vierling and Cardwell. The power forward delivered several big bodychecks and had a couple of good scoring chances.

“He does all the right things,” Williamson said of Savard. He’s just a real team guy and that’s what we really wanted to add.”

ICE CHIPS: The crowd erupted at the Sadlon Arena in the middle of play when the scoreboard above centre ice showed Dylan Guenther scoring at 6:22 of overtime to give Canada a 3-2 win over Czechia in the gold medal final at the world junior hockey championship. L.A. Kings prospect Brandt Clarke, who was a key part of the gold medal team, is expected to rejoin Barrie this weekend and Williamson hopes he has Czechia winger and Colts import pick Eduard Sale in tow with him. “I’m so happy for him,” Williamson said of Clarke. “I believe he should have been on that team earlier and for him to be on it and win the gold, I know he’ll be through the roof.

“If he could bring Sale with him, that would be nice. Tell him to come back to Barrie, that would be a nice compliment.” . . . Thornton has six wins and a shootout loss in his last seven starts. . . Roenick Jodoin returned to the Barrie lineup after missing a couple of games with an upper-body injury. . . Ottawa rookie and Barrie native Gavin Ewles played his first game in front of his hometown. . . Ottawa outshot Barrie 37-32.