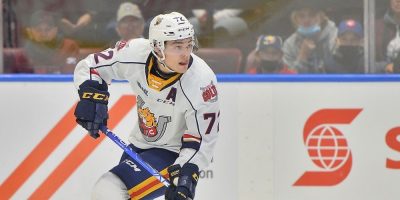 The Barrie Colts are on a bit of a run and Nathan Allensen made certain Sunday to keep those good times rolling.

The veteran defenceman scored just 24 seconds into overtime to lead the visiting Colts to a 4-3 win over the Hamilton Bulldogs, giving them four wins in their last five games.

“It feels good,” Allensen said of the Colts’ turnaround after a slow start to the season. “The mood in the locker room is really good right now, but we’re just trying to build off each win and each game.

“If we can keep this rolling, we’ll be a real good hockey club.”

Allensen delivered the hammer for Barrie (6-5-1-0) in this one with a one-timer from the top of the slot.

Evan Vierling carried the puck over the blue line and dropped it back to the overager who rifled it past Bulldogs goaltender Marco Costantini for the winner.

“I saw Vierling going in with speed and bringing back the defence,” Allensen said on the game-winner. ” I saw the defence backing up and just trusted my shot and getting it on net. Bodies were in front . . . and I was lucky enough for it to go in.”

The Colts found themselves chasing Hamilton (7-4-1-1) on the scoreboard throughout the contest.

Down 2-1, Nicholas Porco tied it just 33 seconds into the third period, but Cole Brown put the Bulldogs back on top just three minutes later.

Beau Jelsma, with his third goal in the last four games, would get Barrie back to even ground with a little more than four minutes remaining to set the stage for Allensen.

“Nice to see Jelsma and (Allensen) get rewarded. That’s a good sign. I thought, for the most part of 60 minutes our last two games, we’ve been the better team. Earlier in the year we kind of let those games get away from us rather than keeping ourselves in them.”

Barrie also battled back for a 5-4 overtime win in Oshawa on Friday night.

“We’ve hit a lot of iron in the past couple of nights. I think (Oskar) Olausson’s got seven posts or crossbars,” Williamson said. “Those will start going in for us and maybe we’ll have easier nights, but to me, learning lessons in tight games like this is real valuable for our group.

“There’s a lot of good performances out there by our guys.”

Despite three power-play chances, the Colts found themselves trailing after the first period on a goal by Hamilton’s Jonathan Melee.

Brandt Clarke tied the game on the power play near the midway point of the second when he slipped in from the point and buried a perfect feed through several skates in front of Anthony Tabak.

Hamilton came right back to take the lead once again three minutes later on a goal by Nathan Staios.

“I think it comes back to the never-quit attitude and staying on them and being relentless,” Allensen said of Barrie’s perseverance.

“We want to be a hungry hockey club and a relentless hockey club and a team that just keeps coming after you shift after shift,” added the veteran blue-liner. “I think we’ve been doing that lately, and we just got to keep it going.”

Clarke now has scored in five straight games. After missing the first two games with mononucleosis, the eighth overall pick by the Los Angeles Kings in the 2021 NHL Draft is making an impact with five goals and 14 points in 10 games and sits third overall in scoring among OHL defencemen.

“He is (making an impact) and he’s doing it the right way,” Williamson said. “We’re proud of him. He’s not pushing the game, he’s not making a lot of unforced errors trying to generate offence. He’s waiting for opportunities and then when he gets them, he’s burying them for us.

“I couldn’t be prouder of how he’s playing for us right now.”

Jelsma has also been on quite a run himself. The rookie centre now has three goals and two assists in his last four games.

“Jelsma has been huge for us and so have the younger guys,” Allensen said. “It’s so nice to see these guys rewarded. They’re working hard every day. It’s good to see everyone chip in and that’s what we’re going to need moving forward.”

Getting the win in Hamilton was also nice after the Colts were burned here earlier this year in a 5-4 overtime loss. Artem Grushnikov scored the winner and should have never been on the ice.

The Hamilton defenceman was handed an instigator penalty for a late third-period fight and should have had to sit out the rest of the game. Instead, he was allowed on the ice to score the winner.

“It’s nice to see the guys get rewarded for playing the right way,” Williamson said. “Losing that one with the guy (Grushnikov) kicked out of the game, and he scores the winning goal, that one was a tough one to swallow.

“This is nice and it makes the little bus ride that we got enjoyable.”

Barrie plays its third-straight game on the road against the Niagara Ice Dogs on Friday night, before returning home Saturday to host the Peterborough Petes.

Game time at the Meridan Centre Friday is 7 p.m.

ICE CHIPS: Matteo Lalama made his fourth-straight start in goal for the Colts, making 26 saves. “We got some solid goaltending, which was real nice too,” Williamson said. . .Barrie outshot Hamilton, 33-29. . . Colts’ Artur Cholach (hit to head) missed his fourth-straight game. “This will be the big week for him,” Williamson said of the injured defenceman. “He’ll come back to practice. He’ll do all those things and then we’ll cross our fingers that he can. If not, it’ll be the following week. I don’t think he’s too far away, but you never know with these things that you can have setbacks. We got to hope it’s a good week for him.”