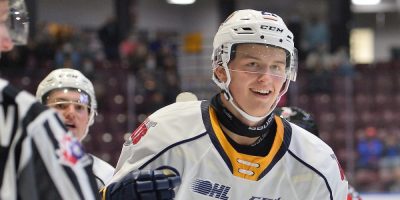 The Barrie Colts staged a big rally Thursday night against the Niagara IceDogs, but it still wasn’t enough to make up for a combination of poor goaltending and defensive play.

Danil Gushchin scored three times and added a pair of assists and rookie Brice Cooke’s first OHL goal proved to be the winner as the IceDogs defeated the Colts, 8-5, in a wild one at the Meridian Centre.

Trailing 4-1 after the first period, the Colts (2-3-1) would rally to tie the game at 5 midway through the third on the strength of a hat trick by Oskar Olausson and goals from Ethan Cardwell and Oliver Smith.

Barrie, though, couldn’t keep the puck out of its net. Cooke scored the winner three minutes later and insurance markers by Dakota Betts, with his second, and Gushchin, into an empty net to complete the hat trick, sealed the deal for Niagara (3-2).

Give up eight goals and you’re not going to win many hockey games.

“Exactly,” said Colts head coach Marty Williamson. “Four in the first period get us on our heels, and I’m proud of the guys how they battled back to get it to 5-5. Then a few more mistakes and not getting the save at the right time, things add up, and you can’t find a way to win a game.”

The IceDogs brought an early end to Matteo Lalama’s first OHL start in the crease in his hometown. The Colts’ rookie netminder gave up four goals on just 13 shots before being replaced by Matthew Sbrocca to start the second period.

Cardwell’s second of the season with just 10 seconds remaining in the middle frame sparked the visitors, who would then cut the lead to one on a goal by Smith at 3:42 of the final frame.

Aidan Castle would make it 5-3, before a pair by Olausson, including a power-play goal, a little more than two minutes apart tied the game.

Cooke put Niagara back on top, but it was Betts’ second less than two minutes later that seemed to take the air out of the Colts.

“We firmly believed we could get that sixth one back if we had to, but then the seventh really make the hill tough to climb,” Williamson said.

Williamson would pull Sbrocca for a two-man advantage after a Gushchin hooking call put the Colts on the power play at 3:19 remaining.

“We tried to pull the goalie early there to try to create something and make it a ‘Hail Mary’ finish and they get the empty net,” he said.

“They buried their opportunities and they didn’t hang their head when we came back at 5-5,” Williamson added.

Once again, Olausson was a force offensively for the Colts. The Colorado Avalanche top prospect now has seven goals in just six games this season.

“He’s been unbelievably consistent for us and that’s nice to see,” Williamson said. “He’s got a heck of a shot and he’s playing well.”

On the other side, Gushchin now has four goals and six points in Niagara’s two wins over Barrie this season.

The Russian, who was taken by the San Jose Sharks in this year’s NHL Draft, has proven dangerous when given any kind of time and space.

“Especially on power plays and that,” Williamson said. “He only had one goal coming into the game and we gave him three. . . the faceoff play and when they swung him for a breakaway, those are the kinds of things you can’t let happen.”

Barrie returns to action Saturday afternoon when they host the Ottawa 67’s in a nationally televised contest on CBC.

Williamson knows his club will have to be much better at keeping the puck out of the net.

“We know we can score goals, but we got to learn to defend too,” he said. “That’s a combination of our goaltenders and then how we play the game.”

ICE CHIPS: Cameron Peters also scored for the IceDogs, who were shutout in two losses coming into last night. . . Sbrocca stopped 14 of 17 shots he faced over two periods. . . Brandt Clarke and Evan Vierling each had three assists for Barrie. . . The Colts outshot the IceDogs, 39-31. . . Barrie was 2-for-6 on the power play, while Niagara went 1-for-4. . . Barrie dropped out of the CHL’s Top 10 Rankings this week for the first time this season.