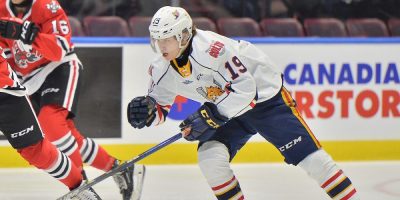 There’s nothing like a winning weekend to put aside a tough start to the season.

Oliver Smith scored twice and Hunter Haight added a goal and assist as the Barrie Colts topped the host North Bay Battalion 6-4 Sunday afternoon to complete back-to-back wins over Central Division rivals and help put a three-game winless skid to open the OHL season behind them.

The win came on the heels of a 2-0 blanking of the Mississauga Steelheads Saturday night at the Sadlon Arena.

“Absolutely. Nothing beats winning,” Colts head coach Marty Williamson said after Sunday’s win. “I’m real proud of the guys today. I thought we didn’t have everything going our way early, but we fought through and stuck with the program and played a good hockey game.”

The Colts trailed 3-2 after the first period, but four consecutive goals from Oskar Olausson, Jacob Frasca and a pair by Smith a little more than three minutes apart midway through the second helped them take control.

Williamson used his whole bench as the Colts showed little or no fatigue from having played Saturday night. In that contest, rookie goalie Matteo Lalama put on a standout performance, stopping all 33 shots to record the shutout in his OHL debut.

“I thought it was a much better win,” Williamson said of Sunday in North Bay. “We had a great goaltender performance in the 2-0 game. I didn’t like our game very much, but today we liked our game a lot. We played well.”

Cooper Matthews, with his first OHL goal, also scored for Barrie (2-2-1) which moved to a point within North Bay (3-2) atop the Central Division standings.

Barrie native Mitchell Russell, Dalyn Wakely, Brandon Coe and Liam Arnsby scored for the Battalion, which was out shot 30-21.

Despite being down 6-3 heading into the third, North Bay could only muster six shots on Barrie goaltender Matthew Sbrocca who picked up his first OHL win.

“We put the effort in,” Williamson said. “Sometimes I think we think we’re an all-star team and we want to make 50 passes and this was a much simpler game for us. It’s funny, my message before was if we play good defence, we’ll score more goals. And that’s exactly what happened to us today.

Much like Evan Vierling’s winner with 1:29 remaining in a scoreless contest against Mississauga. Vierling would then seal the deal with an empty-net goal with 12 seconds remaining.

“It was kind of like the winning goal (Saturday) that wasn’t a cheating goal,” the Colts head coach added. “It was a good chip into the neutral zone and then Vierling outskated guys from behind.

“We weren’t hanging out there hoping something was good, we made it happen. And that’s what I thought most of today was, too.”

Smith made quite the impression in his first game of the season on Sunday after being scratched for the team’s opening four games.

“He was good away from the puck and he gets a couple of scoring chances and he buries both of them. Awfully impressive,” Williamson said of the winger, who got into a handful of games back in 2019-20. “I’m real happy for him, he’s a hard-working kid.

“We’ve been kind of wanting to get him in. We’ve been looking at some different things and it felt good getting him in today.”

Smith now has three goals and an assist in six career OHL games.

“Smitty has been a nice surprise, but again he scored goals in the northern league,” Williamson said of the Sudbury native. “It’s not like the net is foreign to him and that kind of stuff, so it’s nice to see him be comfortable.”

Williamson knows the important thing now is for his team to build off the successful weekend if they are going to go on any kind of run.

The Colts are back on the road to take on the Niagara IceDogs on Thursday and then return to Barrie to face the Ottawa 67’s in a game Saturday afternoon that will be shown nationally on CBC.

“I want them to understand the feeling of what it takes to win,” Williamson said. “That’s the main thing when they understand the work they got to put in and how quickly they got to transition from offence to defence. When they get that feeling, that’s when you can go on runs. Until then, you struggle.

Game time Thursday at the Meridian Centre is 7 p.m.

ICE CHIPS: Veterans Ethan Cardwell (shoulder) and Nathan Allensen (hamstring) missed a second-straight game on Sunday. Williamson anticipates both will be on the ice for a full practice on Tuesday and take it day to day from there. “The feeling was just to rest them, and we’ll get them on the ice Tuesday,” the Colts head coach said. “(Cardwell) is telling me he’s ready to go, so I think both guys have a good chance for Thursday.”. . . Barrie’s struggling power play, which came into Sunday just 3-for-17, connected on two of its five chances.. . . Haights’ first-period goal was the first of his OHL career. The rookie also has a pair of assists to go with his goal in five games.