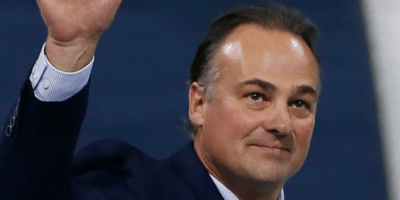 Dale Hawerchuk always paved the way for others.

From the beginning of his storied Hockey Hall of Fame career, to the days behind the bench with the Barrie Colts and right down to the final days of his life, Hawerchuk always looked out for all those who came across his way.

Which is why there’s been overwhelming support to name the entrance into Sadlon Arena Dale Hawerchuk Way.

Barrie councillors have given final approval to honour the former Colts coach, who died last August after battling stomach cancer, by naming an entrance to the arena from Bayview Drive after him.

A star from an early age, Hawerchuk would lead the Cornwall Royals to back-to-back Memorial Cup titles in 1980 and 1981.

When the Winnipeg Jets made the dynamic centre their No. 1 pick overall in the 1981 NHL Entry Draft, the struggling franchise pinned its hopes on a skinny 18-year-old teenager who knew little about the city he was now being asked to take on his shoulders.

Driven to the corner of Portage Avenue and Main Street in a Brinks truck and introduced to the city by Jets general manager John Ferguson, little did fans know that their love affair with Hawerchuk would carry to this day and that the young Oshawa native would put the Jets on a path to hockey respectability.

“Ducky” would win the NHL’s Rookie of the Year while leading the Jets to a 48-point turnaround in the standings. Having won a combined 29 games in missing the playoffs the two previous seasons, Hawerchuk would guide the way for the Jets into the playoffs for seven straight seasons.

Winnipeg became a second home for Hawerchuk, who said the city he grew to love was also the city where “he grew up.”

Hawerchuk paved the way off the ice as well, from shovelling his neighbour’s sidewalk after winter storms to hosting his charity golf tournament.

The Hall of Famer also helped pave the way to success for Canada at the 1987 Canada Cup. Despite finishing among the NHL’s top scorers every season, Hawerchuk was actually considered a long shot to make the national team.

Yet there he was, in the biggest moment of the tournament with Canada and Russia even 1-1 in their best-of-three final and the deciding game tied at 5-5 with a little under two minutes remaining, lining up on the ice with the game’s biggest stars in Wayne Gretzky and Mario Lemieux.

And once again, showing the way.

Hawerchuk would win the faceoff in the Canada end by tying up his Russian opponent and allowing Lemieux to move the puck up to Gretzky.

The “Great One” would eventually find Lemieux for the Canada Cup winner with just 1:26 remaining in one of this country’s greatest hockey moments.

Ducky would go on to play 16 seasons in the NHL with Winnipeg, Buffalo, St. Louis and Philadelphia, before retiring in 1997.

His love for hockey couldn’t keep him away from the game, and he soon found his way behind the bench with the Barrie Colts in 2010.

He would spend nine seasons as the Colts head coach, steering the team to four Central Division titles and leading the team to the OHL finals in 2013.

He would reach the second round of the playoffs in six of those seasons, while winning a franchise record 305 games.

But it was Hawerchuk’s work with his players, guiding the likes of Mark Scheifele, Aaron Ekblad, Kevin Labanc and Andrew Mangiapane to the NHL, that stood out the most.

Leading the way for his players and doing what he could to make their hockey dreams come true.

Scheifele, a star today with the Jets, says he agreed to come to the Colts and pass on NCAA hockey simply after meeting and listening to Hawerchuk.

Hawerchuk’s words of advice still ring true for Scheifele today. That watching hockey was a great education and he should watch as much as he can and learn from it.

Labanc, now with San Jose, was taken aback by just how much Hawerchuk wanted all his players to succeed. Someone who saw nothing but positives in your game and truly cared about the young men he mentored.

Letting them know he would be there for them every step of the way, on and off the ice.

In his final days, Hawerchuk reached out to many of his former teammates and former players. Even as he said goodbye, there he was still leading the way. Still teaching life lessons.

Hawerchuk had once provided hockey advice and provided confidence for a young Ekblad who was one of five OHL players granted exceptional player status and came into the league a year younger than most players.

Now, there he was paving the way for Ekblad to make a difference not just on the ice, but off it.

He talked the Florida Panthers defenceman about how important family was. That how fortunate they were to play this game and be rewarded handsomely for it, but most importantly to make the effort to help others and charities whenever he could.

Hawerchuk always shined a light on where the path was and helped lead the way for so many through much of the 57 years of his life.

And now Hawerchuk Way will guide fans into Sadlon Arena for so many more memorable hockey moments and guide many younger teenage players towards their hockey dreams.

A fitting tribute for a loving family man, a friend to many and a coach who had a huge impact on the city of Barrie that will never be forgotten.

After all, it’s the Dale Hawerchuk Way.