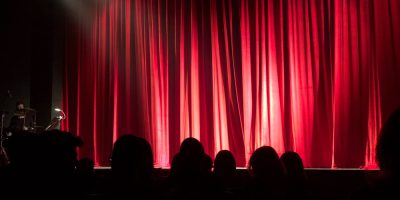 The curtain was raised at Barrie council on Monday about plans for a performing arts centre downtown, at the former Fisher auditorium on Dunlop Street West, property owned by the city.

The performing arts centre (PAC) task force has proposed a 66,500 square foot facility at a cost of $53.1 million.

But that number is pie-in-the-sky and basically a starting point for council to work with as the next steps are taken.

“This motion is just to keep the momentum going and to get the professionals to take a look,” said Coun. Robert Thomson, a member of the task force. “There will be an opportunity for a price tag and funding, footprint and stuff.”

“You know, we’ve approved $200 million in rec centres. Well, this is a rec centre for the arts community.”

The task force began its work eight months ago.

The report talks about the main theatre with 800 to 900 seats, with 60 to 70 per cent of them on the orchestra level and 600 seats when the balcony is closed. There would also be a secondary theatre that would have 350 seats and multipurpose space in that facility for performances and rehearsals, with upwards of 5,000 square feet.

It was also suggested there would be enough for 500 parking spaces in and around the PAC.

“Our mission was to advance the planning to replace Georgian (Georgian College Theatre) and Fisher, and look 50 years down the road,” said task force member Chuck Ruttan in a presentation to councillors on Monday. “Fisher and its 980 seats are gone, and Georgian with its 680 seats is only a temporary fix. That’s a total of 1,660 seats that are being lost. We lost almost 800 seats at the Imperial Cinemas, where the Barrie Film Festival was an anchor tenant, and we lost 400 seats at Central United Church.”

The task force conducted a survey and received over 1,000 responses, which showed overwhelming support for a new facility.

Coun. Jim Harris, who chaired the task force, pointed out that council has created a theatre reserve with $2.5 million banked this year.

The funding model proposed by the task force is 30 per cent each from the federal, provincial and municipal levels of government, with the final 10 per cent to be fundraised.

Using a sample of 18 groups, the task force looked at demand from each of them and there were 158 requests for the main stage, 146 for the smaller stage and 155 for a multipurpose space in a single year. This translates into 195 days of bookings, with 129 days of two or more requests, and potential audience counts estimated at over 45,000.

With the approval of the motion, which still must be ratified at the Jan. 31 city council meeting, staff will engage with a professional firm with expertise in municipal theatre development, design and management to review the recommendations of the task force and report back to general committee detailing recommendations for project timelines, resource requests and project design scope.

Then, once city council has received a memorandum regarding the project scope, an architectural firm will be procured to complete a concept plan and cost estimate for a PAC, and then report back to general committee with the proposed concept plan including, among other things, recommendations for a fundraising program, timelines for construction, and proposed budget, capital budget implications and annual operating budget costing.

Harris added that what they are really looking to accomplish with this motion is “to keep the momentum moving forward.”

Mayor Jeff Lehman said he had never seen the level of alignment, enthusiasm or sense of urgency around this project like he had seen tonight.

“It’s time for us to get building,” the mayor said. “That is not to say there aren’t very important steps. There is the critical issue around external funding that’s going to be required, and it’s not going to happen overnight.”

He said the west end downtown location is perfect for Barrie on so many levels.

“You want to maximize the spin-off impact,” Lehman said.

He said Barrie has been unable to have the same kind of theatre experience because the Georgian Theatre is in the middle of the Georgian campus.

“You can’t walk from dinner to the theatre, you can’t go out after for a beverage, or you can’t do any shopping or have that broader downtown experience. That’s going to be possible if we built on this site. And that $4 million impact straight into the west end of our downtown is just so powerful on the economic front,” Lehman noted.

“If there wasn’t the urgency before, there should be now around the fact that here we are a city of 150,000 aspiring to be one of the country’s leading cities, and we certainly are, but we are missing this piece.”