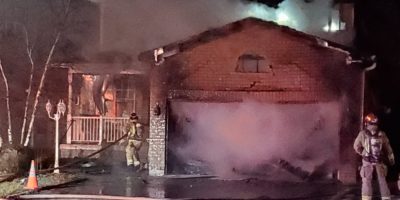 Damage is pegged at $400,000 in a fire that tore through a Country Lane home in the area of Esther Dr. and Heritage Ct. on Monday night.

Assistant Deputy Fire Chief Ed Davis tells Barrie 360 the blaze originated in the garage. Calling the fire accidental but preventable, the cause appears to have been the careless disposal of smoking materials like a cigarette butt.

An elderly woman was taken to hospital for observation. Five other people in the home went to the hospital, Davis says it was for moral support.

The Red Cross assisted by finding overnight accommodations for the home’s occupants.